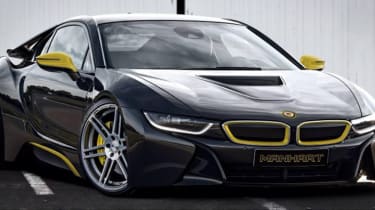 There's no doubt about it, the BMW i8 is the sports car of the moment. Mixing sporting dynamics with high-tech efficiency, the hybrid i8 could very well point towards the performance car of the future. But German tuner Manhart Racing thinks it can make it even better, with confirmation it wants to get working on a modified version.

Producing rendered images, Manhart Racing's i8 concept appears to sit significantly lower than standard on larger alloys - which we reckon are 21-inches in diameter - whilst yellow accents have been added to the kidney-grille surrounds, mirrors, side skirts and brake calipers. The mods might not be to everyone's taste, but thankfully most of the BMW i8's futuristic appeal remains.

Manhart has remained tight-lipped on what (if any) parts of the powertrain it plans to modify, but with a 1.5-litre three-pot and electric motor packaged tightly under the i8's aerodynamic body, there are certainly several areas available for enhancement.

Since Manhart has little experience of modifying hybrids, focusing its efforts at the combustion end of the i8 seems most likely. There's scope for boost to be increased from the turbocharger, whilst there's probably room to push more out of the engine - which produces 228bhp alone in standard form - though efficiency may be compromised. Could Manhart delve into the world of electricity and eke more than the standard 129bhp from the electric motor?

One thing's almost certain, the standard car's low resistance rubber will probably be swapped for stickier items, whilst the almost grand-tourer ride will likely be significantly compromised with that lower stance.

The standard car features an unprecedented level of engineering genius for this sector, with a total power output of 357bhp and 0-62 time of 4.4sec combined with a measly 42g/km of CO2. It's for this reason we'd be surprised if a comparably small tuner could bring much improvement, but we'd certainly be eager to find out.

What do you think? Can Manhart really improve the BMW i8?