The hybrid tech-fest that is the BMW i8, faces off against the more conventional Porsche 911 Carrera 2S Powerkit 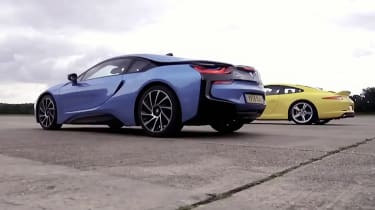 The BMW i8 is an incredibly impressive piece of kit, combining sports car performance with hybrid economy thanks to its use of a tiny 1.5-litre three pot and electric motor. Providing a combined power output of 357bhp, the lightweight BMW has been touted as the sports car of the future.

The Porsche 911 Carrera S is therefore a bit of a dinosaur in this battle. With 2.5 times the oil burning capacity, 3.8-litres of flat-six worth to be exact, the 430bhp Porsche produces more power, but it loses out to the electrically assisted i8 with 100lb ft of torque less than the Beemer’s 420lb ft.

The BMW does weigh in 90kg heavier than the 1395kg Porsche however, a concoction of lightweight carbonfibre and aluminium in the i8’s chassis not being able to counter the heavy battery unit stretched through the car’s centre.

That’s not to discredit BMW’s work in keeping weight under check however. To be within grasp of a conventional sports car is impressive given the amount of extra equipment and technology that’s crammed under the i8’s sleek body.

The cars may be vastly different under the skin, but they do both feature automatic gearboxes, launch control and prices not a world apart from each other. The i8 squeezes in at about £100,000, whilst the Porsche commands £9000 more thanks to its optional Powerkit.

Though the Porsche has the quicker 4.0sec sprint from 0-60mph on paper, the BMW’s superior and instant torque, combined with its four-wheel drive system could make it a real match for the rear-driven Porsche on a dusty Leicestershire runway.

This is therefore a test of real world performance. This is also the first time we’ve pitted a sports car for the next generation against one of the most established from this generation in a drag race. Can the high-tech BMW i8 humiliate one of our favourite sports cars, the 911 Carrera S? The video above has the answer...