BMW has shown us a smaller electric concept at the LA motor show, the three-door Coupe i3 suggesting the brand sees a future for small all-electric models. 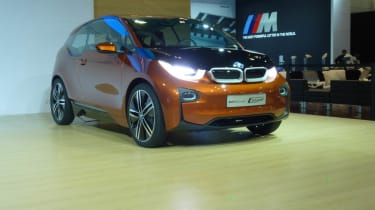 The BMW i3 Concept Coupe has been unveiled at the 2012 Los Angeles motor show, confirming that BMW sees a future for smaller all-electric vehicles.

It's based on the same platform as the five-door model revealed earlier in the year, the i3 Coupe features the same 170bhp BMW-developed electric motor and rear-wheel-drive drivetrain, with floor-mounted lithium-ion battery packs.

Like other BMW i-models, the main body is made from carbon fibre reinforced plastic, and changes to the Coupe include a lower roofline, revised glasshouse as well as a different tailgate. The rest of the car's styling is almost identical to the five-door. The interior has also been toned down compared to the previous concept, pointing towards the i3's production interior will look like.

BMW has said that the i3 has been programmed to provide three different driving modes; Comfort, eco pro and eco pro+. These three modes give the driver the choice of driving styles with different throttle mapping, heating and air conditioning settings. When selected, eco pro+ mode said to increase range by up to 20 miles, to a maximum of about 100 miles.

BMW has said that the i3 and i8 models will be arriving next year. The i3 Coupe hasn't been confirmed for production, but BMW wouldn't be showing it to us unless it was fairly confident there would be demand for a very similar road-going version.