With three times the power of last year's Honda entry, the NSX is one to watch at 2016's event 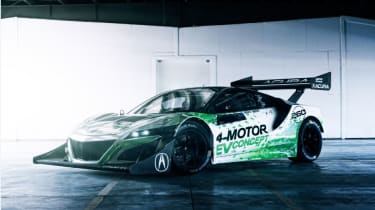 We’ll admit to some Honda NSX ennui in the evo office. That’s not something we’d have thought possible a decade ago, when the rarely-seen V6 sports car had only been out of production for a year and still satiated some of our Gran Turismo fantasies.

But it almost feels like we’ve been beaten over the head with the latest car, such was the frequency with which Honda displayed it at motor shows before we got to drive it. So should we really care that Honda will race yet another version at this year’s Pikes Peak International Hill Climb?

Perhaps we should. For one, it swaps the production NSX road car’s V6 hybrid powertrain for an all-electric one.

Not normally a cause for celebration, but altitude-proof electric cars – combustion ones lose power as the air thins up the 14,115ft mountain, EVs don't – are now a key player at Pikes Peak, and in 2015 an electric vehicle won in every single class, including outright. 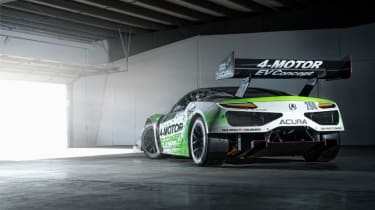 It has provenance too, using a variation on Honda’s Super Handling All-Wheel Drive (SH-AWD) drivetrain that win last year’s Exhibition class at Pikes Peak (which used a CR-Z-like shell).

The drivetrain has all-wheel drive torque vectoring – apparently, even more precise this year thanks to some re-tuning – and like most electric vehicles, regenerates power under braking.

No power figures have been revealed, but last year the setup was enough to set a time of 10:23.829 in the hands of driver Tetsuya Yamano, and Honda does reveal that this year’s car develops – are you sitting down? – three times the total system output of last year’s car. For comparison, a modified, 2014 Porsche 911 Turbo S set a 10:26 in last year’s event, so the NSX will deliver quite a serious punch.