After taking wins in America last year, Honda has made its NSX GT3 available for customers to buy 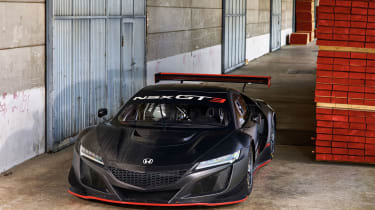 You might think those trackday inspired road cars are cool, with their huge wheels, Cup 2s and half ‘cages, but really they’ve got nothing on proper race cars. As proved by Honda’s brand new NSX GT3 that it will sell to customers to race in more than two dozen GT race series around the world.

The biggest visual difference between the new NXS GT3 and its road car sibling, even more so than the huge rear wing and deep front bumper, is that the entire body is made from exposed carbonfibre. 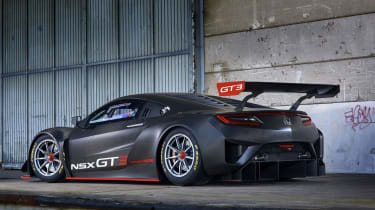 There are further differences between the new circuit racer and the production car too. The race version does away with the road car’s hybrid system and is simply powered by a twin-turbo V6. This engine is very similar to the one found in the production car as they share the same block, head, valve train, crank shaft and cast aluminium pistons. Conveniently the road car uses a dry-sump oil system, also adopted by the race car.

> Read our review of the new Honda NSX

Rather than the nine-speed dual-clutch gearbox from the road car, the GT3 has an XTRAC six-speed sequential transmission sending power to the rear wheels. There are no electric motors hooked up to the front axle either, leaving it steering duties and no more.

As is common for race cars, the GT3 has smaller wheels than the road version. Rather than the 19-inch wheels that the production NSX sports, the race car has 18-inch wheels covering a set of chunky six-piston front and four-piston rear Brembo brake calipers and cast iron discs. The chassis has been simplified correspondingly; the magnetorheological dampers have been binned in favour of manually adjustable Sachs units.

The interior has been completely stripped, as you’d expect, and a roll cage has been bolted directly to the chassis. Just like the exterior almost every surface is made from exposed weave carbonfibre. 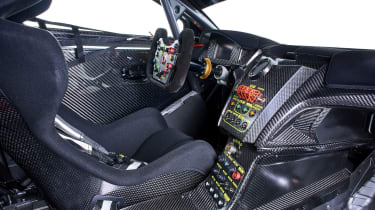 The NSX GT3 has been designed and engineered by Honda R&D in Japan and Italian race team, JAS Motorsport. It has already spent a season competing in the North American IMSA WeatherTech SportsCar Championship, where it has taken multiple wins. So if you weren’t already convinced by the way it looked, knowing that it’s competitive will surely seal the deal.

If you are interested, you’ll have to be quick; only 12 cars are being built for next year’s race season. The cost of each car will start from €465,000 (c£415,000), with race support, parts, training and engineering services costing extra.