If an arcade game designer were to engineer a roadgoing sports car, the result would be very much like the Honda S2000. A screaming, 9000rpm-rev-the-nuts-off-it engine, digital instrument display, snickety gearbox, strong brakes, grippy chassis, tiny steering wheel and killer looks. But what was it like to live with in the real world? 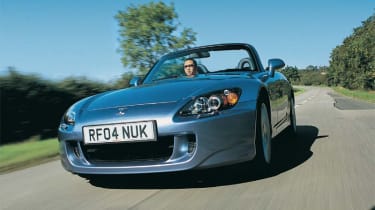 If an arcade game designer were to engineer a roadgoing sports car, the result would be very much like the Honda S2000. A screaming, 9000rpm-rev-the-nuts-off-it engine, digital instrument display, snickety gearbox, strong brakes, grippy chassis, tiny steering wheel and killer looks. But what was it like to live with in the real world?

Early impressions? I was a big fan of the interior's blue hue, which added to the feeling that the S2000 was a 'special' car, while the extremely well-built cockpit was pretty comfortable even though it felt about 9/10ths scale for a grown-up. There was plenty of space for the superbly placed alloy pedals but a real shortage of elbow room. On one occasion, after stepping out of a Golf GTI and getting into the S2000, I slammed my fingers in the door whilst reaching a tad too far for the seatbelts without looking. Ouch! On the plus side, the narrow cockpit, high transmission tunnel and the way all the controls were clustered around the steering wheel gave the S2000 a feeling of intimacy as you chased out all 240bhp from the high-revving 2-litre engine.

The blue carpets looked great too, but they were thin and lacked sound-deadening, making the Honda a noisy place to be with the roof in place (whether hard or soft top). Great for when you were on a charge, but not so great for the 80-mile Monday-morning commute.

Fitting some floor mats helped, as did filling the boot up with luggage. The extra mats went against the Honda's lightweight ethos but made the engine sound sweeter and less coarse, emphasising the addictive rorty induction noise that was otherwise drowned out by the Bridgestone RE050s.

Grip was phenomenal in the dry and, with that lightweight engine sited well back in the long nose, long fast sweepers became a test of nerve, whilst tightening your line wasn't a problem with the lack of inertia. I've generally had at least one truly memorable journey in each of the cars that I've 'owned' at evo; in my time with the S2000 there were at least 12. That's one for each month of the year, when at deadline time I'd be travelling home from our repro house in the dead of night on fast A-roads with the roof down, buzzing along in the 6000-9000rpm VTEC zone. Add in fantastic high-intensity discharge headlamps and you had the perfect night-time drive. This was when the Honda was in its element, driving as though you were on a timed stage before your credits ran out, with little regard for speed limits or road manners. But while the S2000 felt at home with that, it's not a driving style I felt comfortable sustaining. And the problem was, when you dropped out of 'the zone' the Honda could be somewhat tiresome.

The schizo engine was well behaved in town and a screamer on the open road, but in between it lost its way. You really had to stir the quick and precise gearbox to get full value, and you could struggle to get decent power if you were caught napping, which was a bit of a pain on a give-and-take road with slow-moving traffic. Short of leaving it in second gear with the engine spinning away at 6000rpm, it was all too easy to miss that overtaking opportunity if one arose, so I often found myself screaming along for a few miles just in case a gap appeared. Looking at the power graph shows that there's only about 140bhp on tap at 5000rpm and a lot less at 3000rpm. 80bhp anyone? Make no mistake, the S2000 is seriously fast when given a free rein but slower traffic can seriously dent its progress.

The S2000 is very polished in some areas. The pedals felt great, brakes were strong, probably up there with the best for performance and feel, the gearbox wonderfully precise and quick, the drivetrain tight. All of these things gave the impression that a lot of attention had been paid to giving the S2000 a precision-engineered feel. Which probably made the woolly steering feel worse than it really was.

One problem I did experience was the car popping out of first gear whilst cold and setting off from traffic lights. This happened to me only twice (in the same week), though I have heard of other owners experiencing gearbox problems and even resorting to holding onto the gearstick whilst cornering in case it popped out of gear mid-bend!

I asked for the problem to be investigated at the 18,000-mile service and it didn't happen again, though I never established whether the dealer had sorted it or it had just fixed itself. The Honda comes with a three-year/90,000-mile mechanical warranty so if the problem had arisen again I would have felt fairly confident of a long-term fix.

I had some great drives in the Honda. It may not have had the dynamic polish of a Boxster or MR2, but it certainly felt special if a little 'cold'. As one owner put it, 'My previous car, a Miata MX-5, felt organic. The S2000 I merely admire as a great piece of machinery.' That just about summed it up for me.