The NSX was a bit tame by supercar standards; not so the track-bred NSX-R 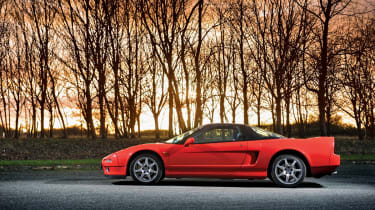 It isn’t that hard to understand why some felt unfulfilled by the NSX. For all its undoubted gifts, it always seemed essentially ‘safe’ rather than ‘scary’, always inspired enough confidence to be conducted at a considerable lick without putting undue pressure on the driver. Arguably, it was the world’s first truly friendly supercar. Yet the fact is, as Honda eventually showed with the NSX-R, red-blooded involvement and precision-guided technology weren’t mutually exclusive. Mixed together in the right proportions they could deliver extraordinary results, whichever sort of driver you were.

A road-going racer designed to kick Skyline and Supra butt in Japan’s JGTC race series, the NSX-R never officially made it to the UK, which was a tragedy. Lighter, harder, faster and hornier than the standard item, it would have been the perfect repost to the 911 GT3 and 360 CS. It was also evo Car of the Year of 2002.

According to Honda, the quicker (4.4sec) 0-60mph time was purely due to the weight savings and slightly shorter gearing which, incidentally, knocked the top speed down to 168mph. The 3179cc V6 was rated at just 276bhp at 7100rpm with 224lb ft at 5300rpm. Our guess was a bit more. Certainly, the sharper throttle response and more ‘urgent’ feel suggested more gee-gees than Honda was prepared to admit to.

The NSX-R got the job done like no other sub-300bhp supercar on earth. Traction off the line was stunning, the rifle-bolt action of the six-speed ’box so fast and accurate you could dazzle yourself with your own hand speed. And what a noise: a howl so hard-edged it could chisel granite.

It’s hard to recall steering that resolved information about the road surface more organically than that of the NSX-R. The confidence it gave was astonishing. Much like the car itself.