Is a new S2000 any closer to production?

Honda has once again dangled an S2000 replacement, caveating any production hopes with questions over potential demand. Speaking to our sister title Auto Express, Honda CEO, Takahiro Hachigō, said “Honda is quick to develop sporty cars if requests are there. I’ve already heard many voices expressing a desire for a new S2000.”

Hachigō recognised the S2000’s global following by commenting, “All over the world there are more and more voices expressing a desire to launch this. However, we need more time to evaluate,” before going on to say, “Our first priority is to have an evolution of our current performance cars for the next generation, but if the sales people can give us a commitment to sales then it [S2000] might get the green light.”

Initial reports in 2015 surrounding Honda’s adhoc efforts to revive the S2000 moniker detailed a car thought to be a scaled down NSX. The Civic Type R’s turbo-four was touted to sit amidships, although that rumour has now been refuted. With the emissions goalposts continuously narrowing, sources close to Honda suggest a turbocharged 1.5-litre, augmented by electric motors will provide power. Honda hopes this more efficient powertrain configuration will yield around 300bhp and the internal combustion engine element could be a reworked version of the 1.5-litre from the current FK8 generation Civic producing 180bhp. 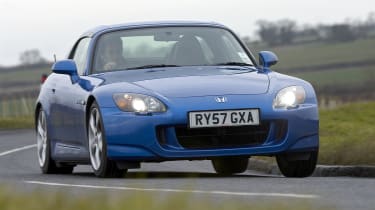 Courtesy of Honda’s previous stint atop the motorsport tree, the trickle-down effect of F1 learnt expertise and technology underpinned the original S2000. The resulting car was by no means perfect but everything was peripheral to the F1-derived V-TEC engine, which, when uncorked, screamed all the way to a 9000rpm redline.

Built on a mid-engined floorplan, like the NSX, it is likely the new S2000 would rehash design elements from the Honda flagship. Speaking to a close source at Honda in 2016, Auto Express discovered Honda is looking to price the new S2000, should it eventually arrive, at around the £50k mark.

When, and if, a new S2000 arrives it'll face some stiff opposition. The next-generation BMW Z4 – recently unveiled in concept form – is due in 2018. We expect it a be a driver’s car true to BMW dynamics, especially if the M division weaves its magic over the car. The Porsche 718 Boxster still remains the segment leader, while its group relative, the Audi TT RS, is the best it has ever been. Jaguar’s four-cylinder F-Type also sits in the same pricing range as the next S2000, too.