After the reveal of the Z4 M40i flagship at Pebble Beach, BMW has followed up with the rest of its Z4 range 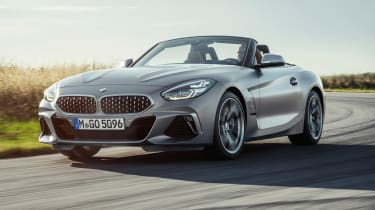 BMW has released full details of its full Z4 Roadster line up after the flagship M40i’s reveal at Pebble Beach last month. In addition to the six-cylinder model, BMW has confirmed that it’ll also be available with two further turbocharged four-cylinder engines as well as diverging further detail about what lies underneath the Z4’s new bodywork.

Those two four-cylinder engines both make use of BMW’s TwinPower turbocharging tech and go by 20i and 30i model names. Both engines are the same turbocharged 2-litre TwinPower four-cylinder engine found across the BMW model range in everything from the Mini Cooper S right through to the BMW 740e iPerformance. Here, the power units produce 194bhp and 254bhp respectively and both, contrary to previous reports, will only be available with an eight-speed automatic transmission sourced from ZF. Despite the relatively low power outputs, acceleration is still strong, taking 6.1 and 5.4 seconds to reach 62mph.

> Click here for our look at the upcoming Toyota Supra

As previously confirmed the Z4 range will be headlined by the M40i, powered by a 335bhp twin-turbocharged 3-litre straight-six TwinPower unit. Like the other models, the M40i’s sole transmission will be an 8-speed automatic, controlled via BMW’s new gear selector or paddles behind the steering wheel. Also specific to the M40i First Edition are adaptive dampers, a limited slip differential and uprated brakes over standard models. BMW state that the new Z4 M40i will reach 62mph in 4.6 seconds, with a top speed likely limited to 155mph.

This new generation Z4 promises to be a sportier car than its more laid back predecessor, too, trading its folding hardtop for a lighter, simpler folding fabric roof, and featuring a new chassis with a reduced wheelbase (-26mm) and wider stance (+74mm). BMW’s usual 50:50 weight distribution has been maintained, although overall weight has not been confirmed. Unlike previous Z4s, which featured a very long bonnet and short tail, the new car has somewhat more conservative proportions, with a shorter wheelbase and longer overhangs, leading to a slightly ungainly profile to our eyes. Unique to the First Edition is the ‘frozen’ paint finish, but basic body styling elements will also find their way onto standard M Sport models too.

The interior is a combination of new and familiar components. Integrated into a new dash layout is the latest i-Drive system, while underneath lies multiple controls familiar from the latest BMW 8-series and X5.

As you will likely already know, this new Z4 has been developed in tandem with the forthcoming Toyota Supra, a partnership that has allowed Toyota to avoid some of the costs involved in developing this type of sports car on its own. But as the Supra heads for a more hardcore sporting bias, we’re interested to know whether the German’s give the Z4 its own distinct spin.