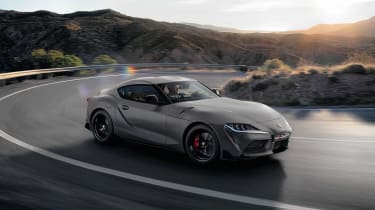 It’s been five years since the Toyota FT-1 Concept first sparked rumours of a Supra revival, but finally, after endless whispers, prototypes and teasers, the new Toyota Supra  is here. It may feature underpinnings shared with the BMW Z4, but the new Supra is more than just an exercise in badge engineering, it’s rather an expression, says Toyota, of the the ultimate modern sports car. More importantly, it has the Porsche Cayman firmly in its sights.

> Click here for our drive of a prototype Toyota Supra

So, the key facts: the new Supra is small, at only 4379mm long, it’s exactly the same length as a Porsche 718 Cayman, this despite its long bonnet and sloping roofline. The wheelbase is also incredibly compact, at 2470mm, some 100mm less than the GT86, both elements leading to the strict two-seat cabin. The body is extremely stiff, stiffer than the all-carbonfibre Lexus LFA in fact, while its centre of gravity sits below even that of the flat-four GT86, two very impressive feats.

Under the front clamshell is a BMW ‘B58’ straight-six turbocharged 3-litre engine, paired exclusively to an eight-speed ZF-sourced torque converter automatic gearbox. From here, power is sent to the rear wheels, via an electronically controlled limited-slip diff, where it’s put to the road with chunky 275-section rear 19-inch Michelin Pilot Super Sports tyres. Models abroad, including mainland Europe are also available with BMW’s B48 turbocharged four-cylinder engine with 254bhp, but this has yet to be confirmed for the UK as it concentrates on the six-cylinder version.

Every part of the new Supra screams performance, and with such a compact yet aggressive footprint, speaks volumes about the Supra’s far more dynamic stance in comparison to the dainty, delicate and eco-rubber shod GT86. 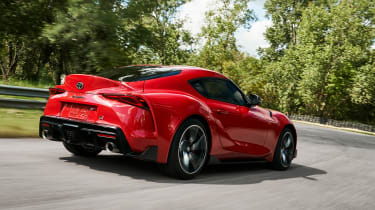 Power is identical to the BMW Z4 M40i it shares its powertrain with, producing 335bhp, with 369lb of torque spread across a majority of the rev-range. Performance is even more impressive than the Z4 though, as the Supra will beat it to 62mph by 0.3 of a second at just 4.3sec. This is in part due to a mildly reduced overall kerb weight at 1495kg, 40kg less than the Z4 M40i at 1535kg, and standard fitment of a launch control function. Toyota has remained coy over the possibility of a manual gearbox option in future, although we suspect it will remain off the table, disappointingly. Top speed is limited to 155mph.

The interior also shares components with its BMW cousin, but implements them in a more austere and focussed interior. The dashboard is unique, with a lower scuttle and more padding around the driver’s seat to keep you in place under hard cornering. Look closely and you’ll spot plenty of BMW bits though, including a version of BMW’s iDrive infotainment system, air-con controls, not to mention most of the main touchpoints. The steering wheel is a hybrid of both Toyota and BMW components, with the controls borrowed from the current generation BMW 3-series, but BMW’s usually squishy, overly thick rim replaced for a thinner, firmer item.

> Click here for our review of the new BMW Z4 M40i

One part of the new Supra that is unmistakably Toyota is the exterior styling, a productionised take on the striking FT-1 Concept that remains as shocking now as it was five-years ago. Toyota’s head of design for the Supra project, Nobuo Nakamura, is adamant that the design was always intended to be the new Supra, and that no compromises were made in its transformation from Concept to road-car, but we’d suspect that might not be the case. One can’t argue about its striking road presence though, and it’s eccentric, compact and often busy surfacing does create a startling contrast against bloated SUVs and cookie cutter German saloons that make up a majority of modern traffic. 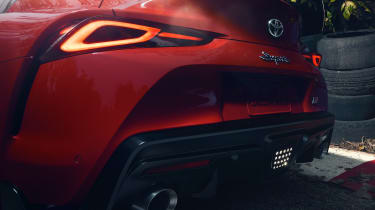 The new Supra doesn’t have this end of the sports car market to itself though, as it’s circa £52k price point in the UK will bring it up against some fairly serious rivals such as the BMW M2 Competition and incoming Porsche 718 Cayman T. It’s not the only historic player trying to get back in the main fold either, as Alpine’s rather wonderful A110 is also priced at a very similar price point, while AMG’s next A45 promises to be a hot hatch so potent, and expensive, it’ll doubtlessly be a force to be reckoned with against the traditional sports car firmament come its reveal later this year. Reaching the first customers in the summer of this year, the new Supra has been a long time coming, hopefully it’ll be worth the wait.

On sale now, with first deliveries in the Summer of this year, pricing starts at £52,695 for the standard car, with Pro models with additional features like leather seats and a heads-up display starting at £54,000. The limited-run A90 Edition will cost £56,945, but with only 90 cars coming the Europe, they're already spoken for by owners who have already left a deposit. 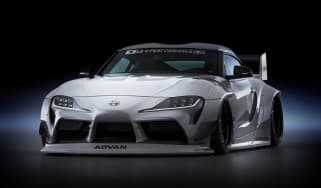 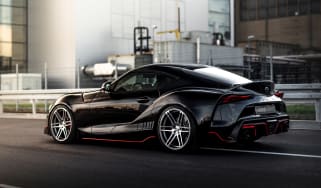