Turbo engine is a step back, but Cayman S still a gem 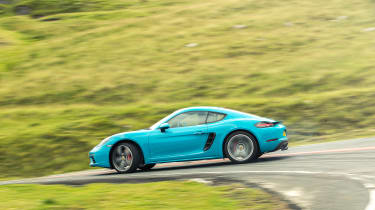 The Cayman becomes the latest Porsche sports car to switch from natural aspiration to turbocharging. Now called 718 Cayman S, the range-topping version is the most powerful Cayman to date (GT4 aside), despite downsizing to a four-cylinder engine for the first time.

The 2.5-litre flat-four uses a single turbocharger and is the same engine that powers the recently updated 718 Boxster S – and which lost the Boxster its five-star rating. It develops 345bhp and 310lb ft of torque between 1900 and 4500rpm.

Porsche still offers a choice between a six-speed manual gearbox and a seven-speed PDK twin-clutch transmission, with PTV (Porsche Torque Vectoring), which includes a limited-slip differential, a very worthwhile £890 option.

Our test car, equipped with a manual gearbox, reaches 62mph in a claimed 4.6 seconds and tops 177mph. With PDK and the optional Sport Chrono package, which includes Launch Control, the S will reach 62mph in just 4.2 seconds – a tenth shy of the first water-cooled 911 996 series Turbo. 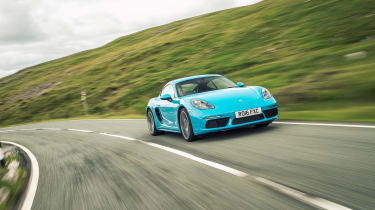 The new turbocharged engine is as modern as they come, with direct fuel injection, variable turbine geometry (first seen on the 997 Turbo) and dry-sump lubrication.

The rest of the 718 Cayman S’s technical highlights are found on the options list. Porsche Carbon Ceramic Brakes (£4977) are overkill for the road but a very useful upgrade for trackday drivers, while the optional sports suspension with Porsche Active Suspension Management (£1133) provides the chassis an even broader ability across everyday, fast-road and circuit driving.

Sport Chrono (£1125), meanwhile, adds the steering wheel-mounted mode switch, an intermediary Sport setting for the stability control system, dynamic engine mounts and, if the car is fitted with a PDK gearbox, the Launch Control system.

Our car is fitted with the optional sports exhaust (£1328), but still the sound at idle is clattery and industrial. The engine is actually rather tuneless throughout its rev range, just as it is in the Boxster, but the Cayman’s solid roof insulates the din more effectively than its cousin’s fabric top.

The soundtrack is a more important factor in a drop-top than it is in a coupe, though, so this new engine is actually more agreeable in the Cayman than it is in the Boxster.

Beyond the soundtrack there are still reasons to miss the wonderful old normally aspirated flat-six, however. Whereas the previous engine was razor sharp in its response and exciting and tuneful in its delivery, this new unit is just a bit soulless. No longer is the engine the very heart of Porsche’s two-seat coupe. Like the Boxster, the Cayman loses its five-star rating as a result. 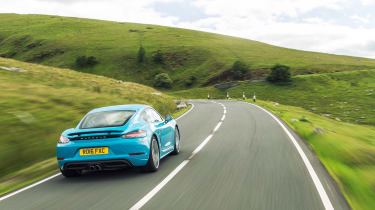 Still, this 2.5-litre engine is at least distinctive in a sea of identikit turbocharged four-cylinders. Whereas most start pulling hard at 2000rpm and run out of puff at 6000rpm, this one needs 2800rpm before it really gets going. What it loses in low-down response, though, it more than wins back in the upper reaches. It picks up again where most similar engines are starting to fade and then pulls with vigour all the way to 7000rpm. In a true sports car such as this one, energy at the top end is much more important than response at low engine speeds.

The 718 Cayman S is seriously rapid, pulling much harder through the mid-range than the previous Cayman S. There’s also a tractability that means you no longer chase the lowest gear and the highest engine speeds, which was more or less the only way to make really quick progress in the previous Cayman. The gear ratios are still long – second will pull 80mph – but again, that great swell of torque means the gearing isn’t anything like as frustrating as before.

Porsche's six speed manual gearshift is as sweet as ever – in fact, it’s a real highlight of the overall package – and the chassis remains a gem. The car feels perfectly balanced with just a smidge of understeer at the limit letting you know exactly how hard it’s working, and the quality of the damping is superb.

The Cayman's new steering system, meanwhile, is a good improvement over the old car’s rack, the faster ratio and more direct response making the car feel so much more positive and alert on the entry phase. The steering isn’t the most communicative, but you’re never left wanting for feedback because the whole car is so faithful and readable. 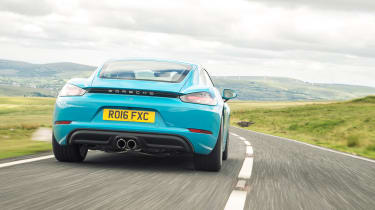 Despite the big gains in torque output, traction is never an issue. In fact, with the Sport stability control setting selected the new Cayman is a more playful and throttle-adjustable machine than ever.

The 718 Cayman has enjoyed a more successful transition to turbocharging than the Boxster. Porsche has polished the Cayman's mid-engined chassis to an even higher level of brilliance than before. But, a car's engine is an integral part of the experience, and just as with the Boxster the new Cayman has lost some of that magic with the switch to four-cylinders and turbocharging, hence its drop from a five to 4.5 star car.

BMW’s M2 is similarly powerful and at £51,425 it’s usefully cheaper than the 718 Cayman S. It also has four seats to the Porsche’s two, but its chassis isn’t quite as exquisite as the Cayman’s.

The 718 Boxster S is perhaps the Cayman’s biggest threat, however. At £55,607 it’s a touch more expensive than the coupe (Porsche has realigned its model range with new 718 Boxster models now priced above their Cayman counterparts), but it’s just as good to drive and the convertible hood will add another layer of enjoyment for many buyers.