Alpine’s A110 is still basking in good press. Will the Porsche 718 Cayman T halt its momentum? 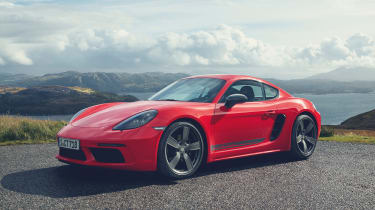 Porsche has revealed a new version of the mid-engined 718 Boxster and Cayman twins. Called the 718 Boxster T and 718 Cayman T, the new models follow the same recipe as this year’s 911 T, in offering a lighter, more focused and more accessible performance variant compared to ‘S’ models.

But Porsche is on the back foot with the 718, due to its uninspiring flat-four engine and new rivals like Alpine enjoying lots of good press with the sparkling new A110. Porsche is hoping to redress this, pricing the new 718 Cayman T at £51,145, around £700 less than the now sold out A110 Premier Edition, and pretty much level-pegged with the A110 Pure when fitted with an equivalent PDK. But the T’s pricing treads a fine line between the standard car and the S, priced £700 less than the latter, while still being some 49bhp down on power.

That’s because the powertrain is shared with a standard 718 Cayman, producing 297bhp from a turbocharged 2-litre flat-four engine. What is included for the extra money is a chassis tune that was previously exclusive to the Cayman S, along with a raft of new standard equipment including the Sport Chrono package, PASM sports suspension, 20-inch wheels, a sports exhaust, Porsche Torque Vectoring and some pseudo GT-like interior elements such as the fabric door pulls, sports seats and a smaller GT Sport steering wheel. 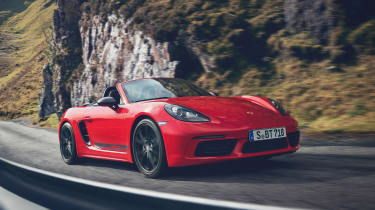 There are some bespoke elements, including shortened gear ratios on the standard six-speed manual gearbox (a seven-speed PDK is optional), grey finishes on the mirror caps, wheels and unique Cayman T decals on the door sides. All up, these additions when specced on a standard Cayman add up to an on-the-road-price of around £54k, not including the bespoke components mentioned above, so in that context, the Cayman T could almost be seen as good value.

The question we’re asking though is whether the 718 T, in either body, will live up to the promise of offering a more immersive driving experience compared to the standard 718 S that costs much the same. The 911 T, despite offering hints of a GT3-lite driving experience, failed by not pushing the lightweight Carrera recipe far enough for our tastes. We’ll have to wait and see if the 718 T leaves us as cold.