991.2 Porsche 911 Carrera T review – is this the more driver-focused Carrera we've been waiting for?

A really good car, but a missed opportunity also. 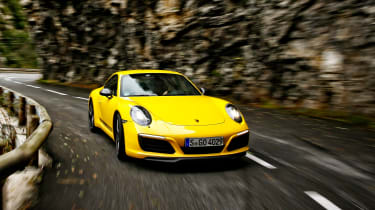 On first hearing the details of the Porsche Carrera T you’d have to be virtually comatose not to be excited by the recipe. The best 911s over the years have often been the lightest ones, and the simplest, too. After all, rarely has a 911 been merely about raw power. Yet it also feels like the T arrives at a crucial time; the Carrera range having been overshadowed in recent years by the huge interest in products emanating from Porsche’s GT Department. Is this the moment the humble Carrera strikes back?

The T is based on the standard Carrera, not the more powerful S variant - although as we know, both cars are virtually identical bar tweaks outside of the engine’s internals and matters of spec. The Carrera’s 365bhp turbocharged flat six, these days just 3-litres, remains unchanged, just rather more vocal because the usually optional factory sports exhaust is on the standard equipment list. Both the seven-speed manual and twin-clutch PDK transmission are available, but you’ll do without the limited slip diff if you choose PDK, and its weight penalty and ethos seem at odds with what the T stands for. A manual T can crack 0-62mph in 4.5-seconds, while a PDK-car in Sport+ mode will complete the same sprint in just 4.2-seconds.

Nothing is ever straightforward when manufacturers quote weight figures. For the T, Porsche describes it as 20kg lighter compared to a Carrera with similar equipment. Hmmm. For the record, the figure is 1,425kg (versus a quoted weight of 1,430kg for the Carrera).

The key standout features of the new car are the lighter rear side glass and rear window - borrowed from the GT2 RS project - the deletion (optional) of the rear seats, and the reduction in sound proofing ‘to a minimum’. You can also choose to omit the entire infotainment system in preference to a plastic cubby hole. Otherwise it’s what Porsche has put back in that justifies the considerable rise in price over a Carrera (from £77,891 to £85,576). Chiefly, these are items of spec that the great Porsche supercomputer likes to say ‘no’ to when you order a Carrera: the aforementioned diff, the 20mm lower PASM sports chassis and the ability, at extra cost, to tick the box marked ‘active rear-wheel steering’. We were told originally that the T features lower gear ratios, and this turns out to be the fitment of the same final drive ratio as used in the Carrera S model.

From the outside you’ll identify a T by its slightly more aggressive front splitter, the grey 20” Carrera S wheels and grey mirrors, plus the special script on the doors and at the rear. Inside there are some ‘Sport-Tex’ centres for the seats, a shorter gearlever with the gear pattern denoted in red, and if you go for the ‘T interior package’, then coloured stitching and further coloured elements can be brought into the interior design.

Imagine what a slightly noiser Carrera drives like and you have both the triumph and tragedy of the Carrera T. Let’s be blunt: the standard Carrera is a fine car, and a very good 911 - if not a great one - so it was always highly unlikely that the T was going to be a duffer. It isn’t - it’s actually very good, with plenty of the qualities that have made 911s so alluring over the years.

For starters, it’s confirmation that a good ‘road’ 911 needs no more than 350-400bhp, for the T always feels fast enough whatever task you apply it to. The 3-litre unit is an honest, useful engine, with more than a little of the deep-chested torque and low-down rumble of a later big-displacement air-cooled engine. Alas, it also has neither the low-down kick of a real ‘Turbo’ or the step up in delivery and soundtrack of the great naturally aspirated flat sixes, so you’re left sometimes feeling you have the worst of both worlds. The seven-speed manual ‘box is reasonably direct, although Porsche made the mistake of having a Touring Pack GT3 on hand with its slick six-speeder, a reminder of how delightful even the most basic of 911s used to be when changing gear yourself. 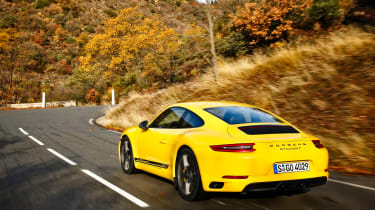 Most of the time the T just laughs in the face of a challenging road, its suspension so polished and unfazed, an occasional bob of the nose over bumps a physical reminder of its engine location. The steering is wonderfully clean and precise, if no more feelsome, and while it takes plenty of throttle or provocation to bring the tail into play, the LSD means there are plenty of options once you’re back on the power in a corner. It’s also refined, largely comfortable and eminently usable, like all good 911s are. In short, it could easily be all the performance car you ever need. But what about ‘want’?

The problem arises between the expectation that Porsche’s marketing department has created, the desire of us here for a more affordable, more attainable 911 that still really connects as a driver’s car - and the reality. The fact that you’d need to drive both T and Carrera models back-to-back to really pinpoint the differences speaks volumes here: this is no mini-GT3. 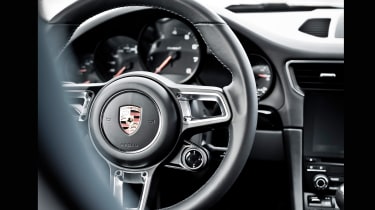 Is it a bit louder inside? A little, maybe. But it doesn’t feel like much sound-deadening material has been removed. Does the weight difference made a difference? Given its a less than 2% reduction, it’s unlikely. Does the S-spec final drive make a difference? Possibly - but the gearing still feels long. If you’re expecting a model that makes the base car come alive, that truly delivers an invigorating driving experience - like the 968 Club Sport did for the 968 - then you’re in for a disappointment, and that’s such a shame. It might have natty red fabric door openers, but when your eye studies the door area around them you realise it also has luxury leather door cards, electric windows, electric mirrors, two storage bins and nice stitching. This feels like faux-lightweighting for effect.

Obvious rivals for the £85,576 ‘T’ come from both within and outside the company. For £87,335, plus the option of sports chassis (£581) and a sports exhaust (£1,844) (the LSD is standard) you could have a 414bhp Carrera S. Similarly, the thought of a basic-spec Carrera with a heap of change and some aftermarket mods is very appealing. But perhaps the T’s most intriguing rival is the recently-introduced BMW M4 Club Sport, a car with a similar back-to-basics ethos and, at £89,130, a not dissimilar price tag.