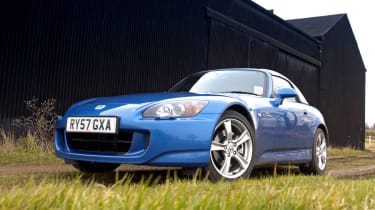 The S2000 is one of those cars that has lived its life on the cusp of greatness. We first drove Honda’s high-revving, rear-drive sports car over 100 issues and nine years ago and since then there have been two reworkings of its chassis – the key area of untapped potential – yet there remains the feeling that the S2000 could deliver more.

That hasn’t stopped it being a steady seller in the UK. Getting on for 600 were sold here last year, and this year there’s yet another chassis set-up, the only visual indicator of which is a set of handsome five-spoke alloys. Could this be fourth time lucky for enthusiasts like us?

What’s apparent pretty quickly is that this is by far the stiffest suspension the UK S2000 has worn. It’s borrowed from the Japanese-market ‘Type-S’ and although the low-speed firmness is initially a bit of a shock, the more you get reacquainted with the car, the more appropriate it seems. After all, the VTEC in-line ‘four’ is as focused a 2-litre engine as it’s possible to find, delivering its 237bhp at 8300rpm (and its meagre 153lb ft of torque at 7500rpm), while its six-speed ’box has an incredibly fast, short and direct gearshift.

You’ve got to work the S2000 hard to get the best from its engine and the taut new chassis adds a dynamic urgency that gives the car a more homogenous feel. Stiffness can mean snappiness, an intimidating prospect in a compact rear-driver with a torque-sensing limited slip differential, but since we last tried the S2000 it has gained a drive-by-wire throttle and VSA – Vehicle Stability Assist. You won’t notice VSA in the dry, and not just because there’s little torque to trouble the hold of the rear tyres out of corners. Up to speed on an inviting back road, the S2000 shows improved composure and balance, and a grippy, exploitable agility.

The original S2000 had sharp steering but was blighted by an excessive lateral compliance in its rear suspension, an elasticity that made it feel imprecise when you were pushing on. This was lessened in subsequent chassis revisions, and in this latest evolution it’s almost entirely gone. Confidence up and VSA switched out, in the wet you can steer the S2000 accurately on the throttle if you wish. It telegraphs its intentions well, delivering a warning shot of understeer as you dive into a second-gear corner before shifting into snappy but catchable oversteer if you choose to keep your foot in.

You don’t have to push to the edge of the S2000’s grip to appreciate that it’s more poised and rewarding, though. It seems easier to keep the astonishingly rev-happy VTEC engine above 6000rpm, and even when you’re not wringing it out, there’s dynamic crispness and accuracy to maintain your interest. The only disappointment is that now that the rear suspension is more composed, the steering is in the spotlight, and while the electrically-assisted set-up is keen, accurate and has good weight, it’s lacking in feel. This is most obvious in the wet, where understeer is revealed more by the fact that you’re visually straying from the steered line rather than the tactile sensation of the front tyres slipping wide.

Overall, the latest chassis delivers more of a driver’s S2000 than any previous set-up. Nine years on, however, other aspects of the Honda seem less acceptable. The steering wheel doesn’t adjust for height or reach and the driving position is quite cramped; the S2000 feels a size too small even for those of average build, while the LCD instruments look almost quaint. And while its VTEC ‘four’ delivers in thrilling fashion at the top end, it sounds ordinary, almost coarse, when it’s pottering.

Still, the S2000 is more the car we hoped it would be when we first drove it: a uniquely focussed and thrilling traditional sports car with an extraordinarily exciting engine, one of the world’s most wonderful gearshifts and, now, a chassis that matches their keenness. It’s a shame that Honda has saved the best for last.