Should you buy a used TVR?

TVR’s renaissance is well underway, but past models offer something unique in the world of sports cars. Here’s what you need to know. 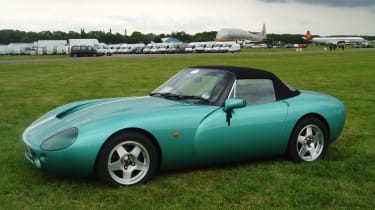 As the wait continues for the all-new TVR Griffith, with expectation and cynicism vying for primacy across the wider car-enthusiast world, the market for TVR as-it-was continues to build on the momentum gained over the past few years.

Although a rise in prices has largely been led by the last and arguably the best TVR yet made, the Sagaris, let’s start with what are the traditional entry points for ‘modern’ TVR ownership: the Griffith and Chimaera. Although many buyers now choose to enter TVR ownership with later models, it’s these earlier Rover V8-powered cars that still form the backbone of the TVR scene.

The Chimaera (’92-’03) remains the most accessible model from this era of TVR. Still, prices have risen to a typical £12,000-15,000, with the best now at £20,000-plus. Like any performance car, there’s a big difference between the rough and the very good, and as ever it pays to buy the best you can afford. Regardless of that, the Chimaera is a great example of a post-modern ‘classic’ British sports car: evocative, fast, useable, and not forgetting that inevitable sobriquet, hairy-chested.

> Click here to read-up on the all new TVR Griffith

The Griffith (’92-’02) maintains its desirability over the Chimaera, with prices around £10,000 more across the board. Decent ‘500’ models now fetch £25,000, and late, low-mileage cars can be a lot more. They’re a handful to drive, but for many this is the iconic TVR from the Peter Wheeler era and the lure of those looks will never wane. Like any TVR, it’s chassis corrosion that can be the most expensive issue to put right, and it’s often where you can’t see without taking the body off. A professional inspection is worth the investment.

Once into the era of TVRs with the firm’s own engines – either the Speed Six or AJP V8 – there’s a broader selection of models on offer, and over a broader price spectrum, too. These cars are more complicated to maintain and restore, and a poorly cared for car will be in a very sorry state by now – both structurally and mechanically. There’s also more than a little truth in the notion that TVR carried out its development work on its initial customers, so early Cerberas and Tuscans, to mention just two models, were often plagued by issues. A ‘sorted’ early car by now should be vastly better, but still, it’s something to consider. As Jason Clegg of TVR specialist Str8six says: ‘For all the grief Nikolai [Smolensky – the Russian investor who bought the company off Wheeler] gets, he did do a lot to improve quality on the Mk3 Tuscan and Sagaris models.’

Early AJP-engined Cerberas (the model ran from ’96 to ’03) can still be bought on the cheap, but most will be restoration projects or have a tale to tell by now if priced in the low teens; find a late car in good condition and you could be looking at £40,000- plus. However, a decent car at around £20,000 offers incredible performance and so much theatre for the money, although it’s not for the inexperienced behind the wheel. 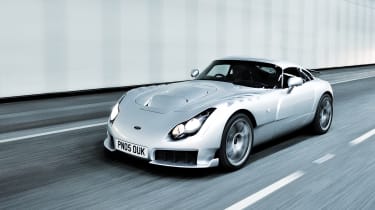 But it’s the Tuscan (’99-’06) that retains much of the limelight. For years beset by engine problems with the Speed Six motor, a wise purchase now consists of finding a car with a recent engine rebuild by one of the well-known specialists. With their modifications the unit should be reliable, allowing you to focus on all the positives, such as the uniqueness, the sound, and the raw performance. The Mk2, which arrived in 2005, was a more refined package, though a late Mk1 S can still command more. The Mk3 of 2006 was another step forward again – if you can find one.

The fabulous Sagaris (’05-’06) sits at the top of the tree, although only the best cars are pushing the £70,000 marker. With so few made, rough cars tend to hang around in showrooms as an educated market knows they’re ones to avoid. Some worry that the arrival of a new TVR may dent the value of these cars, but given their unique appeal, that seems unlikely to happen. 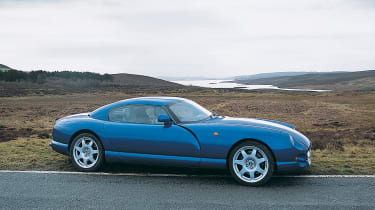 Any good Griffith-onwards TVR is increasing in its appeal, diverging ever further from the sanitised, electronically controlled norm of contemporary performance. Far from being outdated, these machines take on evermore relevance for enthusiasts turned off by modern technology.

If you’ve ever contemplated a traditional 1960s British sports car, a Chimaera looks like great value and serves those classic ingredients, while the rare T350 adds a slightly modern twist; the right Cerbera at the right price also looks tempting.

But our money would go on a cared-for Tuscan in a subtle colour. It’s a shape that hasn’t really aged, and at current values it remains a lot of car, a lot of fun and a lot of performance for the money. 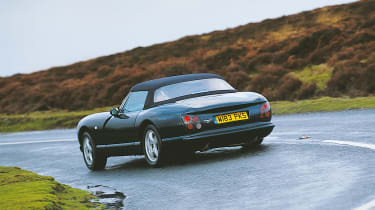 ‘The market is good at the moment as there’ll never be another car like a TVR: it’s raw, sometimes crude, there’s no ABS. A TVR will highlight the skill you haven’t got, which is either a burst of adrenalin you love or it scares you and you sell. I think over the next 20 years they’ll become very valuable. I have a lot of customers who are becoming collectors.

‘However, right now I think the market is perhaps over-buoyant – just because one car sold for £70k doesn’t mean they’re all worth that. We sold a Sagaris for £63k, but it was the right car at the right money, and even then you have to wait for the right buyer. I’m not convinced that TVR’s return will put prices up, but it will increase awareness.’

‘Prices have been on the up since 2009, starting with the Sagaris. Those cars hit a low of £28k in 2008, when they were only three years old. Back then it was a constant battle with buyers worrying that the engine was a grenade waiting to go off.

‘However, specialists have carried on developing the Speed Six and there’s confidence in the market now that it can be reliable. We’ve raced ours in 4.7-litre form since 2011 and only had three DNFs in that time, none engine related. And we’ve beaten all the AJP8-powered cars! Today, if we get a low-mileage, immaculate Sagaris in stock, that’s £75,000. The T350 was the next one to go up, and post-2003 Cerberas are very desirable now, too.’

‘The era you’re dealing with starts with the pre-cat Griffith in 1992. Whatever the engine spec fitted, these cars are sought-after, and very rare. I don’t think we’ll see massive jumps in their values as they really are a handful to drive. They’re cheap to keep on the road and a great experience, but just not for the faint-hearted. The Griffith 500 appeared in 1993, but it’s the post-’95 cars that you want as they were much more reliable. You’ll need mid-£20,000s for a decent car now, and we’ve achieved £50,000 for perfect, low-mileage ones. The Chimaera is fantastic value for money, but once again I’d avoid the earlier cars. The best are the post-’97 models, made through until 2001. They’re very reliable.’