It's grown up, evolved and lost a few rough edges but the entry-level Tuscan is still one mighty beast 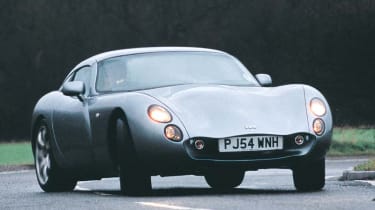 Things are changing at TVR, and we're not just talking about the management. Take the second-generation Tuscan. While little different externally, this entry-level Tuscan, and the more extreme Tuscan S (see evo 076), have been subject to some 300 detail engineering changes. Ranging from prosaic things such as ventilation fan volumes, to dynamic essentials like suspension geometry, steering rack assistance and spring and damper rates, the evolution of the Tuscan is indicative of the company's new approach to building cars. TVR is growing up.

Some things don't change, though. Like how a 4-litre, 350bhp sports car weighing a smidge over a ton can be regarded as the mild-mannered version. And that's a good thing, because now, as ever, the Tuscan is a ballistic device. Powered by a 350bhp version of Blackpool's hearty 4-litre straight-six, the Tuscan will hit 100mph in less than 10sec, and deliver the kind of honest-to-goodness normally-aspirated thump that makes every squeeze of the throttle a vivid, sensory kaleidoscope.

However, unleashing such forces in the old Tuscan was always something of a double-edged sword: terrifically exciting but, if the road was damp or bumpy, heart-poundingly edgy at the same time. Do the same in the revised model, and you'll find the fear factor has been reduced.

The secret to this new-found progression and on-limit friendliness is a combination of re-rated springs and dampers, some slight geometry changes, and a considerable amount of work on the bump stops.Rather than crudely signalling the end of the suspension's travel, the new bump stops come into play earlier but continue to absorb suspension loadings. The Tuscan thus feels more pliant and composed without losing any of its alertness or response. It dives far less under braking and resists squatting under power, helping to unite the responses of the front and rear, which previously felt too sharp and too soft respectively. The net result is a Tuscan that's less snappy and intimidating when you're pressing on or the roads are wet and slippery.The steering has also been improved by the adoption of the electric power-assisted rack first seen in the Tamora and T350. With 2.0 turns lock-to-lock compared with the old Tuscan's 1.75 turns, the steering is less aggressively pointy, which has calmed the front end's formerly darty, hypersensitive feel. On bumpy, wet or heavily cambered roads it's an improvement that does a great deal to boost your confidence and sense of control.

Of course, with ample power, low mass and no ASR, DSC, PSM or any other southern shandy drinking electronic safety devices, the Tuscan 2 still demands respect when you drive it hard. The difference is the new levels of consistency and progression mean you can really enjoy testing its limits, rather than feeling like you're walking a tightrope. And when you're not trying to squeeze the power on earlier and earlier on the exit of a corner, the Tuscan is sufficiently composed to let you relax and enjoy the supple ride and big-engined tractability. A good ABS braking system would give you added security in a panic situation without harming feel or response, but there's no question the Tuscan's stoppers are first rate in every other respect.

It's not just the dynamics that have benefited from detailed fettling. The interior has more space for oddments, the stereo now features state-of-the-art flat panel speakers for vastly improved clarity, the digital dash display features a new adaptive shift light that, amongst other things, warns against over-revving when cold, the roof panel stows more neatly in the vast boot and - Peter Wheeler cover your eyes - there's even provision for holding a cup in both door bins!

Predictably though, many design eccentricities remain. The door release buttons under the mirrors never fail to impress, and while the deliciously sprung interior door release might confound detection at first, once sussed it makes getting out as much of an occasion as getting in. I'm not sure the redesigned dashboard is as aesthetically or ergonomically pleasing as the original, especially now that the glorious alloy and brass Jules Verne-style instrument pod has been hidden inside a bulbous shroud. The steering wheel feels uncomfortable and looks awkward, and the seats don't provide enough lateral support, but despite the flaws few interiors come close for intrigue and adventure.

Cup holders? Increased boot space? Has TVR gone soft? Hardly. But there's a definite sense of maturity about the Tuscan 2. The original car's bad temper has mellowed, and while it remains fiercely quick, the Tuscan's now a faithful rather than a feral beast. With madder, badder machinery like the Sagaris and Typhon waiting just around the corner to satisfy TVR's head-banging fraternity, the Tuscan (and forthcoming Tuscan Convertible) has been allowed to develop into the beautiful, accomplished, individual car TVR's customers have been crying out for: a modern day Griffith.