Key areas to check when buying a Cerbera 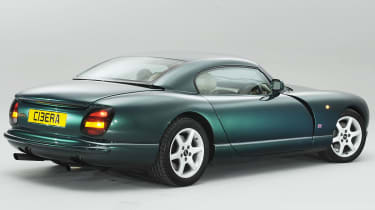 ‘You must go into TVR ownership with your eyes open,’ says Paul Glynn, ‘and plan to spend £2000-3000 a year. Buy the best you can for the money, with a history from a reputable dealer or specialist. But don’t be too suspicious if the seller says it has had a factory engine rebuild and there’s no paperwork. The factory didn’t give paperwork even to the dealers.’

• EngineThe V8 is a labour-intensive engine, with several hours’ work every 24,000 miles to re-shim the 16 tappets. ‘It tends to get overlooked,’ says Paul. The six-pot needs its clearances set every 12,000 miles, but it’s a much easier process on this engine.

Oil burning is seldom a problem but leaks can be, notably from the V8’s front cover. Setting up the throttles requires a laptop and specialist knowledge. TVR Power, the engine division, is still in business. • TransmissionThe Borg-Warner T5 transmission is ‘bulletproof’ apart from occasional wear on second- and fifth-gear synchromesh. The clutch tends to fracture the fingers on the pressure plate’s diaphragm spring, often well before the plates have worn out. ‘If the clutch feels really heavy, knock £1400 off,’ says Paul. ‘Same goes for any sign of clutch fluid dripping between the clutch and the bell housing.’ A clutch typically lasts around 25,000 miles.

• Suspension, wheels, brakesNothing peculiar here, but odd clonks can signal worn bushes. Some owners fit polyurethane bushes, which sharpen the already-sharp handling but can make the ride harsher. The power steering is prone to leaks. Various different sizes of wheels, tyres and brakes were used over the years. • Body and chassisThe glassfibre body is strong, ripple-free and seldom develops cracks, but water can leak in around the door seals. The chassis can be trouble. Damage to the powder coating quickly causes rust to spread beneath, and badly corroded Cerberas are now failing MOTs. The worst section is likely to be the outrigger at the back of the front wheelarch, where there’s a mud trap, but check all the other tubes behind the sills and across the chassis for pinholes or worse. Repair usually involves partially lifting the body off the chassis, typically a £2000 job. A new Speed Six chassis from Multipart is £4025, plus fitting. • ElectricsA perennial TVR problem to the end. Check everything works: lights, dip switches, wipers, the electric door-opening buttons, the immobiliser, the boot lock, the gauges, the windows. All, plus their ECUs, are repairable with parts and expertise from the cottage TVR industry that has grown up since the factory’s demise.