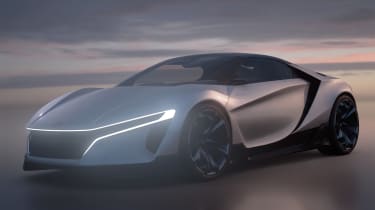 Honda has taken to the virtual world to showcase its new Sports Vision Gran Turismo Concept. Styled in its California design studio, like the Honda NSX, the coupe is set to feature in the Gran Turismo Sport PS4 game.

Father of Gran Turismo, Kazunori Yamauchi, invited manufacturers to develop their ultimate expression of a two-door sports car to feature in the latest instalment of the Gran Turismo trilogy. Over 25 cars including models from McLaren, Bugatti and Mercedes-Benz make up the collection of cars exclusively featured in the game.

The prospect of designing a car for the famous racing simulator was one Honda welcomed according to Tsuyoshi Matsuhashi, chief officer of design management, saying ‘this is a project for Honda’. Subsequently, Honda opened a competition to their global designers to come up with the best impression.

The winning studio in Los Angeles drew on three core ideas to shape the two-seater according to exterior designer, Ben Davidson. ‘Three main concept words we used to develop this vehicle were futuristic, lightweight and exotic’. The concept, which looks like a shrunken evolution of the NSX, raises questions as to whether it could point to a possible Honda S2000 replacement but Honda has revealed nothing on any production car implications.

Once a virtual design had been finalised, a ¼ scale clay model of the concept was sculpted and the designs were sent to Japan. There, a team of modelers, designers and engineers realised a full-scale example to generate accurate aerodynamics models. These were subjected to extensive wind tunnel testing that would transfer into the game to deliver true and accurate driving dynamics.

Extravagant use of carbonfibre in the construction would keep the kerb weight down to 899kg. Held within the lightweight body, mounted amidships is a turbocharged four-pot producing about 400bhp, which finds its way to the wheels via an eight-speed dual-clutch transmission.

Honda may have avoided mentioning the S2000 in reference to the new concept, but there have been hints that a new  sports car could be forthcoming, to sit below the NSX. There’s every chance that it could borrow from the design of the Sport Vision Gran Turismo Concept.