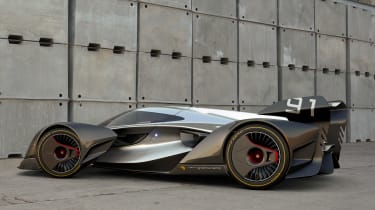 Mclaren has become the latest car manufacturer to create a futuristic virtual hypercar for the Gran Turismo Playstation franchise. The new car, christened the McLaren Ultimate Vision, will make its debut in the latest version of the game - Gran Turismo Sport for the PS4 - that launches on October 17th.

McLaren’s design fuses LMP1 influences and advanced hypercar forms, with a tightly waisted middle and a front end more like a single seater racing car with the addition of individually faired front wheels. Power comes from the 4-litre twin-turbo V8 familiar, we suspect, from the 720S, with an electric motor mounted on each of the front wheels. This gives the Ultimate Vision combined outputs of 1,134bhp and 940lb-ft, which given the projected weight of 1,000kg should ensure it is suitably lively. Perhaps most intriguing of all, the driver of the Ultimate Vision lays on their front, with their head close to the front axle. Three versions are available: Performance, Ulterior and Noir. 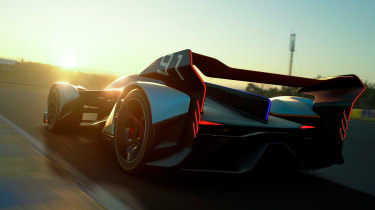 The firm is quick to point out that the Ultimate Vision ‘Demonstrates McLaren design thinking beyond 2030’, and is ‘Not a prototype for any future model’. It’s nevertheless tempting to look for clues as to the future direction of Design Director Rob Melville and his team. In particular, perhaps the Ultimate Vision gives a hint as to the company’s forthcoming ‘BP23’, the three-seat hyper-GT deemed the spiritual successor to the F1 and the product of McLaren’s MSO division. Having said that, the only imaged release so far of BP23 showed a long, flowing, low-drag form, in line with its more grand touring brief, some way from the aggressive, track-inspired shape of the Ultimate Vision.

Gran Turismo creator Kazunori Yamauchi’s call for manufacturers to create cars under the Vision Gran Turismo moniker has led to a multitude of advanced designs, such as the Bugatti concept in 2015 that pre-dated the Chiron and virtual cars from Hyundai and Aston Martin, to name but a few. We’ll have to wait and see if the Ultimate Vision follows Bugatti’s lead by previewing a future model.