Hyundai brings the fight right to the VW Golf GTI with its first, and very serious, hot hatch 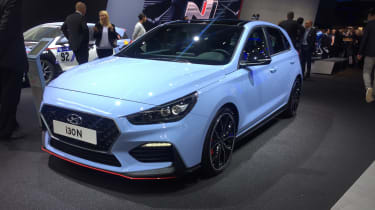 Hyundai’s desire to be taken seriously as a world-class manufacturer has just taken one step further with this, the long awaited i30 N. Far from just another body-kitted or gently sous vied warm hatchback, Hyundai’s i30 N is a full on attempt at long established rivals like the Golf GTI and Focus ST.

Hyundai is so serious about making the i30 N a serious hot hatch contender, it drafted in Albert Biermann from BMW’s M division to head-up the project. No element has been left alone and not one component ignored in its development, so does it have what it takes to compete against the best in the hot hatch business?

If you were just look at the spec sheet you might be right in thinking so. The core of the i30 N’s transformation is the engine, a 2-litre turbocharged inline four. Available from launch in two power outputs the standard car punches with 247bhp and 260lb ft of torque. 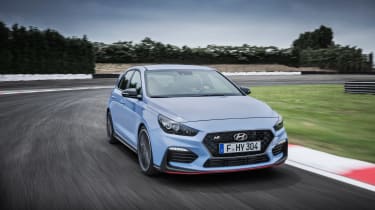 An optional ‘Performance Package’ gets various performance additives. Most notable is a 24bhp boost to the engine’s brake horsepower to 271bhp, however torque is unchanged.

Power is sent to the front wheels via a six-speed manual gearbox no matter which car you choose, but the i30 N with the performance package benefits from an electronically controlled limited slip differential.

As well as the diff’ the traction of the performance pack cars is aided by wider 19-inch Pirelli P Zero tyres developed specifically for the car, as opposed to the 18-inch Michelins on the regular car. 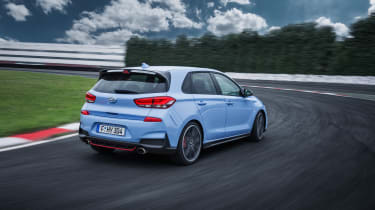 The bigger wheel and tyre size is necessary to accommodate the larger brakes that come with the performance pack. The 271bhp car also sits 4mm lower than the standard i30 N, and a whole 8mm lower than an ordinary Hyundai i30.

Compared to the Golf GTI the Hyundai’s figures are favourable, with the VW only able to muster 225bhp and 241bhp, in the standard and Performance Package cars respectively, but the Golf does fight back with a very similar torque figure and weight savings of up to 100kg over the i30 N.

Under the bonnet sits an all-aluminium 2-litre turbocharged four-cylinder engine. Not currently available in any other UK model, the ‘Theta’ engine has been doing duty in models like the Genesis Coupe and Sonata saloon in various forms since 2009.

If that blunts its image don’t fret, as Hyundai have done masses of work turning the engine into a proper performance motor. With engine response as a core deliverable from the engineering team, the engines peak 260lb ft of torque is available from as little as 1450rpm and will stay on stream right up till 4500rpm.

Performance figures are on par with its main rivals, with the standard car hitting 62mph in 6.4 seconds, exactly the same as the Golf GTI. Upgrade to the Performance Pack and that number will drop to 6.1 seconds, pipping the Golf GTI PP by 0.1 of a second. Top speed is an impressive 155mph. 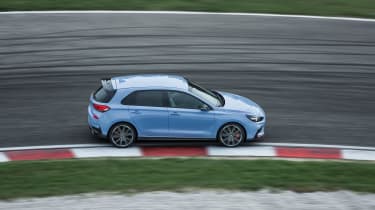 Rather than focussing purely on the engine’s performance, Hyundai has paid strict attention to the way the motor sounds so that the i30 N feels like a performance car through and through. The noise from the exhaust is variable, with the sportiest setting including an ‘after-fire’ noise. As is typical with modern turbocharged performance cars, an internal sound generator pipes noise from the engine bay into a resonator at the base of the windscreen.

All this excitement is nothing if the car isn’t poised and controlled, so as well as spending many development hours on the Nurburgring – 24 of them in the Nurburgring 24-hour race – Hyundai also used some of the UK’s most demanding roads to fine-tune the i30 N’s chassis. And as a result, it is fitted with adaptive dampers as standard.

These are controlled through various driver modes, with the top N mode putting all the car’s hardware to maximum attack mode. It is these modes that inform the engine mapping, steering, ESP settings, exhaust as well as the suspension. On Performance Package cars, these settings also control the e-LSD.

Thankfully, Hyundai has given drivers an N Custom mode that enables you to combine any combination of those set-ups into one easily accessible mode, much like BMW’s M modes and undoubtedly thanks to Biermann’s influence.

Visually aimed more at the Golf GTI and Peugeot 308 GTi than the raucous looking Honda Civic Type R or Ford Focus RS, the i30 N is more about subtlety, adding a measured amount of aggression to the slightly limp looking standard car. The black lower trim panels and side skirts sit nicely with a black rear wing that simultaneously adds some visual punch without looking too fussy, although the red stripes front and rear are hardly original.

The overall boxy shape responds well to the design modifications, set off with the larger 18 or 19-inch wheels depending on whether you choose the performance pack. A nice touch is the availability of Performance Blue, they colour utilised on Hyundai’s successful 2017 i20 WRC entry. 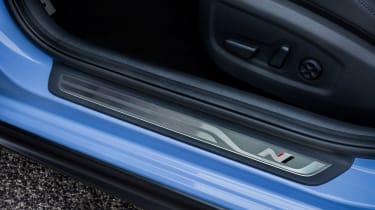 Inside, the subtle changes continue, with Hyundai fitting sportier seats and a new i30 N specific steering wheel. Key for easy transitions between driver modes, the new steering wheel has two large control that sit underneath the spokes, as well a new button to switch on and off the auto-blipping downshift function.

The individual driver modes are controlled in detail through the touchscreen however, which also features new software giving the driver further engine information like instant power, torque and boost figures. The instrument cluster has also been freshened up, with a BMW M-style variable redline and up-shift lights at the top of the binnacle.

Price and on sale date

Hyundai has yet to release prices for the UK market, and although it sits above the Golf GTI in performance terms, the Golf’s relatively high price tag means we suspect the two will be quite closely aligned. Due to go on sale towards the end of this year, final equipment specifications will be revealed closer to that time, but if what Hyundai have told us is accurate, the Koreans might finally have the tools to take on the west at their own hot hatch