A respectable warm hatch from Hyundai, but Ford’s Focus ST-Line does a better job 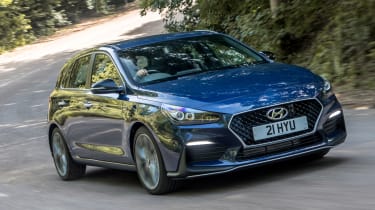 Toned-down versions of hot hatchbacks are nothing new, allowing customers a taste of a performance model without the associated costs.

With the Hyundai i30 N-Line, it’s the first time Hyundai has offered such a model – not least because the Hyundai i30 N it sits below is the company’s first real attempt at a proper hot hatchback. Far from being just a fancy badge though, the company claims some real ‘N’ input into the N-Line – this is our first chance to see whether that’s true, in N-Line+ form. 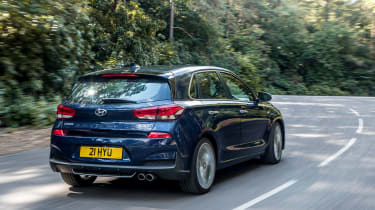 Power is sent through the same six-speed manual gearbox (to the front wheels, via an open differential), however. A dual-clutch transmission is available (for £1000 extra) but that 1.4 is the only engine option – there’s no diesel, suggesting Hyundai is keen not to devalue the N brand by offering the trim line on just any model in the range.

Structurally it’s all fairly conventional here. The i30’s body is a mixture of steel and ultra-high-strength steel, with MacPherson strut front suspension and a multi-link axle (across the range, setting it aside from several rivals) at the rear. Steering is electrically assisted with 2.6 turns lock-to-lock.

Not that Hyundai hasn’t made several changes, and it’s clear some of the N’s magic has been sprinkled on N-Line models too. They ride on 18-inch alloy wheels wrapped in Michelin Pilot Sport 4 tyres, and N-Lines also get a sportier suspension set-up and larger brakes than regular i30s. There are also some of the visual elements of the proper N, albeit without the larger rear spoiler and the exhaust outlets either side of the rear bumper. 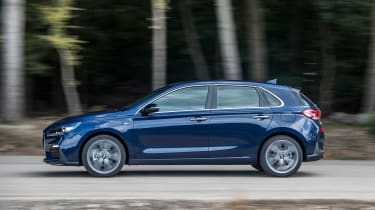 There’s no getting around it – with little more than half the power of the top Hyundai i30 N Performance but similar weight to carry around, the N-Line’s straight-line pace falls closer to the tepid end of the hot and cold spectrum. The 1.4-litre is smooth enough, but struggles against mass and tall gearing and has a paucity of torque compared to the full-fat models, while also lacking their involving exhaust note.

In isolation it’s respectable enough, however, and while it takes at least 2000rpm to get going and there are flat-spots in the power delivery on part-throttle (presumably to aid emissions figures), the engine pulls cleanly enough and you can move along at a brisk pace. The gearshift helps you make the most of the engine too, with a swift and pleasantly tactile change much like that of the N, though unfortunately the pedals are a little awkwardly spaced for heel-and-toe on downchanges.

Lack of power isn’t so much of a problem in a chassis that allows you to maintain momentum, and here the N-Line feels closer to its big brothers. Not quite as serious, perhaps – the steering isn’t as weighty as the N’s on even its lightest setting, there’s not quite the same bite from the tyres and the brakes aren’t as powerful as the Performance model’s, but the nose remains responsive and the chassis well-balanced, resisting understeer well and letting go progressively when it does. 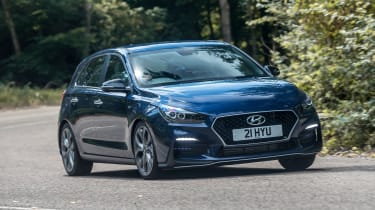 Unexpectedly, the N-Line doesn’t ride quite as pliantly or quietly as the N, despite running on 18-inch wheels – an inch smaller than the items fitted to our long-term N Performance. We’re putting this down to the quality of the adaptive dampers on the N compared to the N-Line’s passive units, and also the N’s extra chassis bracing that cuts down on any twisting and vibrations in the shell.

The N-Line is far from uncomfortable, though, and with the same well-shaped seats (in N-Line+ trim), three-spoke leather-trimmed wheel and spherical gearknob as the N the driving environment feels similar too. Only in the details does the N-Line feel less special – its instruments are more conventional and lack the progressively illuminated, BMW-style rev-counter of the N, and driving mode buttons are absent from the steering wheel. 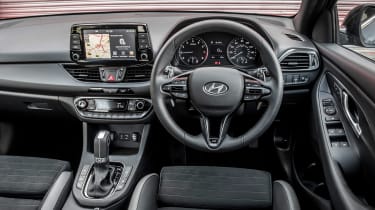 N-Line pricing begins at £21,255, with the aforementioned mechanical and visual changes over standard models, plus keyless entry, an 8-inch touchscreen and cloth seats. For £23,255 the N-Line+ adds LED headlights, some leather and suede seats much like those of the i30 N Performance, and electric adjustment and heating for those seats, as well as a heated steering wheel.

The Ford would be our choice as a driver’s car out of the three. Not only is its three-cylinder 1.5 the more pleasant engine to use (though like the Hyundai’s four, it feels sluggish below 2000rpm), but its chassis is the most engaging in this class and quality has taken a big step up over its predecessor too. 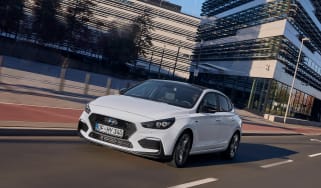 Hyundai’s i30 Fastback picks up sporty styling and a fettled chassis, priced from £20,495
Visit/hyundai/i30/21108/hyundai-i30-n-line-uk-pricing-and-specs-announced 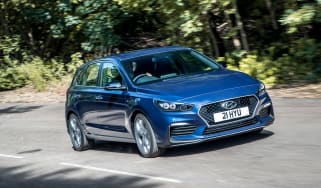 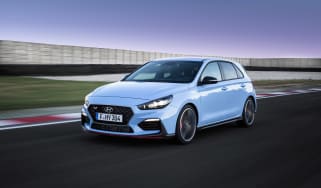 Hyundai brings the fight right to the VW Golf GTI with its first, and very serious, hot hatch
Visit/hyundai/i30/18294/hyundai-rn30-at-paris-motor-show-details-and-photos-of-hot-hatch-concept 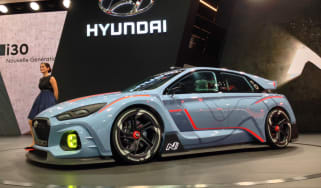 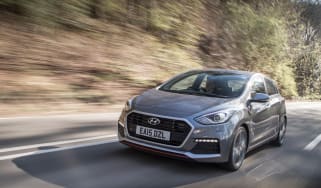 Hyundai enters the traditional hot hatch market, but doesn’t yet have the firepower to compete
Visit/hyundai/i30/14376/hyundai-i30-review-price-specs 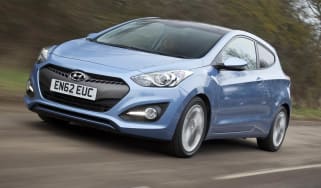 Korean cars have improved massively in a short space of the time: can the Hyundai i30 hope to topple Ford Focus and VW Golf?
Skip to HeaderSkip to Content