Korean cars have improved massively in a short space of the time: can the Hyundai i30 hope to topple Ford Focus and VW Golf? 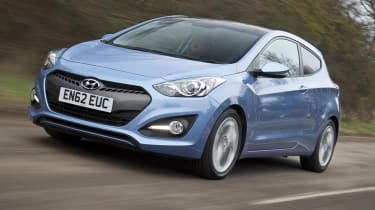 What is it? The Hyundai i30. Hardly an evo Car of the Year contender, but the exponential rise in Korean car quality over the last decade means Hyundai’s mid-sized hatchback is now a very plausible Ford Focus and VW Golf rival. Available in three-door, five-door and estate bodystyles, it’s very reasonably priced, kicking off at £14,200. We’ve driven it as a 126bhp 1.6-litre CRDi turbodiesel, which starts at £19,190. Technical highlights? The 1.6-litre turbodiesel engine sends 126bhp and 192lb ft to the front wheels, yielding a 10.9sec amble to 62mph. This is adequate, though, when you consider the i30’s 108g/km CO2 emissions and claimed 68.9mpg, figures which improve further if you choose the more efficient Blue version, adding stop/start technology.

Other engines on offer include two petrols – a 99bhp 1.4-litre and 118bhp 1.6-litre – as well as a 108bhp tune of this 1.6 diesel and a very meagre sounding 89bhp 1.4 CRDi, which majors only on list price with worse fuel economy than the 1.6 and a yawning 13.5sec 0-62 time; unlikely to be called upon in Top Trumps, but it will translate into overtaking frustration in the real world.

Standard is multi-link rear suspension (the sportier Veloster coupe, spun off the same platform as the i30, gets a simpler torsion beam setup) and a host of attractive kit including LED running lights, hill start assist, air conditioning and Bluetooth among the equipment. Options include an impressively high resolution reversing camera and an LCD instrument display.

Most intriguing is Flex Steer, a system allowing three degrees of steering weight – Comfort, Normal and Sport – via the touch of a steering wheel mounted button. What’s it like to drive? Remember the Hyundai Accent of the 1990s? Its 2013 equivalent shares not one jot of its character. If you aren’t swayed by badge power, then this is a credible rival to the class standard (Golf, Focus, Astra, Megane). It grips well, has decent body control, a supple ride and will change direction with more than enough keenness for most buyers in this corner of the market.

Its steering in particular is pretty pleasing, providing more feel and weight than many of its rivals, though everything is relative in the days of electric power steering. It feels at its best in ‘Normal’, though, Flex Steer not really anything more than a smart-sounding gimmick. While the i30’s all very nice, though, there’s little sparkle. Its driving experience, tidy though it is, does little to draw in enthusiasts. That’s far from an issue in this wallet-friendly eco version, but should Hyundai choose to transplant a more interesting engine into the i30’s slickly-styled front-end (such as the 184bhp 1.6 turbo petrol due in the Veloster coupe), then the chassis will need extra verve to keep up. That the Veloster achieves this on the same platform and with less complex rear suspension does suggest an i30 GTI could actually be a sharp and understated little hot hatch, however, playing off the new Kia Ceed GT nicely. The diesel engine tested here doesn’t feel as keen as its torque figure suggests, but as a cheap to run company car choice it’s hard to fault, with little fuss at motorway speeds and just enough grunt to make the odd country lane interesting. Despite some enthusiastic exploration of its narrow powerband, we achieved around 52mpg in mixed driving, so with a higher fraction of cruising and with economy a little more in mind, the mid 60s would be a plausible target. How does it compare? This used to be easy, with Hyundais priced at the bottom end of the hatchback market. At £19k before options, though, this diesel i30 is little cheaper than an equivalent VW Golf, Ford Focus or Vauxhall Astra. It looks as stylish though (and impressively European, with none of the awkwardness you might associate with Hyundais of old), while its equipment levels and seven-year warranty package trump The Big Three.  Anything else I need know? Perhaps its peskiest foe is the Kia Ceed (and three-door Proceed), which uses the same box of bits, looks sportier and is priced marginally cheaper. It might all come down to which dealer is nearest, though…