Lexus has revealed the latest version of its mid-sized coupe concept car, now called the RC. Pictures and details here 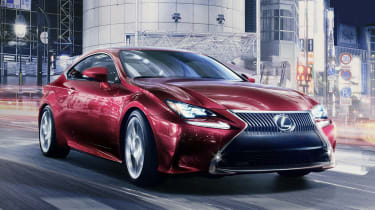 Lexus has revealed the first images of the new RC concept car, a mid-sized coupe to rival the BMW 4-series, which is due to be revealed at the Tokyo motor show next month.

The Japanese coupe concept will be unveiled in two different forms: the 3.5-litre V6 petrol, and the more humble RC300h hybrid – which offers the same four-cylinder petrol hybrid drivetrain as the IS300h.

It’s easy to see that the styling of the RC Coupe is a natural progression from the IS saloon, and features many of the key elements first seen on the LF-LC concept car, such as the triangular headlights and Lexus’s now trademark spindle grille.

Two wheel designs will be shown at the Tokyo show, which Lexus claims will be seen on a production version. Both 18 and 19in wheels for the concept cars are machined rather than cast, and feature platinum caps.

There are no interior photos yet, but Lexus says that the interior features an ‘upper operation zone and lower display zone’, which separates the different instruments and controls. The seats are also made using the same foam molding technique used for racing seats.

A high performance version is also widely expected, acting as a spiritual successor to the Lexus IS-F. Images of a purported Lexus RC-F have appeared online, a coupe with similar styling cues to the IS-F (right down to the quad exhaust tailpipes) as well as a more powerful 5-litre V8, with a 455bhp output and increased fuel economy thanks to cylinder deactivation. The IS-F's 5-litre naturally aspirated V8 petrol engine hustles the four-door saloon from 0-60 in 4.7sec and onto a 173mph top speed, and the RC-F ought to improve upon these figures and take the fight to the new BMW M4 coupe.