Three Mitsubishi hybrid concepts for the Tokyo motor show, but can we expect similar tech on a new Evo? 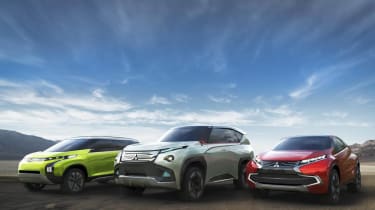 If Mitsubishi replaces its Lancer Evolution sports saloon, here is the strongest hint yet it will have an oft-rumoured hybrid powertrain. The Japanese company will show three concept cars at November’s 2013 Tokyo motor show, each of them a plug-in hybrid.

They’re unashamedly practical looking things, ‘incorporating a new design that symbolises the functionality and reassuring safety inherent to SUVs’, in the words of Mitsubishi.

The concept most likely to cast a glance at potential Evo drivetrains is the biggest of the lot, the GC-PHEV (pictured, silver). It has full-time four-wheel drive, a front-mouned supercharged 3-litre V6 powering the rear axle, an electric motor taking care of the front.

Such a combination could easily produce the 350bhp-plus necessary for an Evo, so we can live in hope, though we’d rather see the eight-speed automatic gearbox replaced by something a little more hardcore. The GC itself also previews what a next-generation Mitsubishi Shogun might look like. To call it ungainly would be quite polite, so let's hope there's a minor design overhaul if it is to make production.

The other two concepts are less questionably styled, and while not exactly performance cars, they’re pretty slick looking nonetheless. The AR (green) is a small MPV, with a hybrid system based around a front-axle driving 1.1-litre turbo petrol engine, while the XR (red) is a Nissan Juke-alike model spun from the same parts. As well as forward-thinking hybrid tech, the three concepts also exhibit ‘e-Assist’ safety systems.

Still, it’s a potential rival to the new Subaru WRX STI we’re most excited about…