They’re pitched as sports saloons that you could happily live with day-in, day-out, but which is the best all-rounder: the new supercharged V6 Audi S4, Mitsubishi’s Evo X FQ-330 SST or BMW’s 335i? 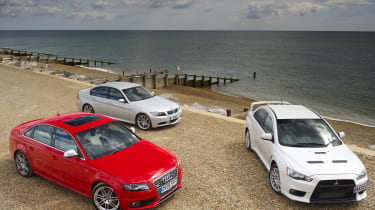 Acceptance of the tenth-generation Lancer Evo remains an ongoing process, and we’ve ummed and ahhed about it for the last 14 months or more. Acclimatisation is the key word here. We tried our best, but the FQ-300 SST we ran on the Fast Fleet was curiously unlovable. Mitsubishi had taken the bold decision to alter the Evo’s angle of attack, but its aim was off target. The sights needed to realigned.

And they have been. Brief early drives in this, the latest FQ-330 SST, complete with a re-programmed version of the twin-clutch gearbox  and a host of engine mods, have suggested that a sweet spot has now been struck. We shall see…

Similar exposure to the new Audi S4 has been equally encouraging. But where Mitsubishi has toned down the Evo experience to reach a wider audience, Audi has been going the other way, ramping up the drama and excitement.

Audi’s biggest problem is a lack of consistency. One moment it builds a blinder, the next a dullard, meaning cars such as the RS4 and R8 are shooting stars in an otherwise bleak sky. The two latest RS models, the RS6 and TT RS, have adopted Audi’s traditional fall-back position: efficiency without exuberance. And be honest, can you name a single truly satisfying S car? Not the last two S4s, that’s for certain.

Now, having dabbled with both turbos and natural aspiration on those cars, Audi has settled on supercharging (contrary to the ‘T’ badge on the flank) as the best means to extract power, in this case 328bhp of it from a 3-litre V6. But of more importance are the alterations to the weight and torque distribution, the addition of an active diff and the sense that Audi’s engineers have finally cottoned on and realised past shortcomings. So Audi and Mitsubishi are converging on the centre ground, territory owned by probably the most complete executive sports saloon of the last decade, BMW’s 335i. Yes, the car you see here is a pre-facelift example (owned by reader Ben Jackson), but aside from a modest expansion of the track widths (6mm at the front, 24mm out back), cosmetic alterations formed the basis of the recent revamp and the 302bhp twin-turbo 3-litre straight-six was left well alone.

One more thing. We’ve purposefully made sure all three cars here are self-shifters – a straight auto for the Bee-Em, twin-clutchers for the other two. The reasoning is very simple – almost no-one buys manual gearboxes in this class. Anyway, what’s wrong with a bit of left-foot braking?

The 200 miles to Aldeburgh on the Suffolk coast slip past with surprising ease. The Evo rides calmly and has a polished, even-tempered feel: communicative, biddable, willing to follow your lead. It’s a confident, well-rounded package – a quality it will prove to have in common with both rivals.

Visually, it strikes a very different note. The Evo’s tall tail stalks the sleepy coastline like a shark’s fin in a swimming pool, the car’s outward demeanour entirely different to its inward behaviour. The S4 and 335i patter along in its wake, docile and largely unnoticed.

We park up by a pebble beach and while Chris Rutter frames up various shots we take a closer look at the cars. Doors are opened and closed, seats sat in, tyres checked (especially the non-run-flats that Ben has recently fitted to his 335i) and bonnets raised. The Lancer’s transverse four is shoved to one side, the engine bay bisected by a fat stainless steel pipe. The BMW’s longitudinal straight six is neatly packaged and tucked well back, but it’s the Audi’s V6 we spend the most time looking at. We’re struggling to see, but the packaging of the diff, clutch, gearbox, engine and front axle must have given some very clever people some very big headaches. What we do know is that the diff is now sited between engine and clutch, which allowed the axle to be moved forward to improve weight distribution.

I don’t want to drive the S4 just yet, though; I’d rather reacquaint myself with the 335i first. There’s a beautiful, weighty smoothness to the steering at low speed, backed up by the engine’s meaty thrum and accessible torque. It feels serious – but as we pick up the pace, also a touch loose. It could be the Vredestein Sessanta tyres, it could be the 30,000 miles on the clock, but as John Barker confirms, it’s a touch vague around the straight-ahead. This means there’s a moment’s hesitation between turning in and being convinced the car is with you.

Once into a corner, it’s a different matter. There are some good roads just inland, and one bend is particularly revealing. It’s a fast right-hander that crests at the apex, throwing the car towards the verge. Except that the BMW doesn’t get thrown. Instead you feel the sidewalls flex as they take up the strain, then the front end really gets to work, biting into the road, the chassis largely neutral with a hint of drift. I love the way you can pour the power on without the nose pushing wide, and instead feel the weight balance move rearwards. It’s challenging, yet friendly. As JB will say later: ‘It’s the transparency of the front-engine/rear-drive layout, the clean steering and plentiful feedback.’

But I’m not convinced it’s infallible in this company. The brakes are dead at the top of their travel and the comparatively lazy auto won’t let you have full manual control (only the Evo does that), while even Ben admits its rival’s paddles are more intuitive.

Whatever Mitsubishi has done to the Evo X’s SST gearbox, it’s worked. The basics are that the 50 per cent torque limit in first gear has been removed and the ECU has had a rewrite, so no longer do you fear those sweaty moments at junctions as the Evo counts to three before lurching forward. And it remains devastating on a quiet country road. It’s not a big car and yet it still shrinks around you, making you feel as if you’ve got more room to play with than you actually have. It feels so light and playful that making full use of the leach-like front end comes naturally. But keep an eye on the rear – it’s soft and can be easily provoked by lifting off. Keep the power on and the suspension compresses, the nose lifts, and provided you’re not too early in the corner (where you’ll discover understeer) the Evo carries huge velocity out.

It’s a fun car to work with, providing you with a business-like driving environment (albeit one that’s short of executive toys), but it misses the mark spectacularly in one area: the engine. You wait for the turbo wallop to hit home, but it never fully engages, never feels remotely like it has 324bhp. It’s weird because the X doesn’t lose ground to its rivals, but the impressions of speed are reduced – not least by the four cylinder’s monotone droning. Following it back to Aldeburgh, I’m gobsmacked by the amount of black smoke it pumps out too. Clearly the Evo hasn’t grown up and moved on in every area.

After a particularly memorable fish ‘n’ chip lunch we split up and I commandeer the Audi to go in search of some photographic corners. We know what we want the S4 to do – demonstrate its rumoured new-found propensity for oversteer – trouble is, it’s not that kind of car, certainly not as gifted in that department as the 335i, anyway, and actually a less natural, instinctive slider than the Evo, too.

We’ll come back to that in a sec, because there’s plenty else to appreciate about the S4, such as the way it goes in a straight line. The supercharger is undetectable, makes the turbocharged 335i feel laggy and propels the S4 forward with real gusto, allowing it to attack these roads and really work what turns out to be an encouragingly three-dimensional chassis. Crisp damping and good body composure mean it often feels more in touch with the road surface than the BMW, but when you really start to lean on it, encouraged by the signals you’re getting, the S4 isn’t quite assertive enough. But it’s a fine effort, level-pegging with the 335i in many areas, but ultimately just a little more stand-offish.

And yes, if you give it the berries in second out of a roundabout you can feel power being fed to the rear, and the active diff does a good job of making it feel rear-wheel drive. Actual sliding? Nah, not really. But you know what? It doesn’t matter – you’re engaged by the S4’s eager direction changes, the way it works all four tyres evenly, the unflappable traction.

It’s enough to give it the nod over the Mitsi, which, despite being the best X we’ve driven, struggles to justify the £35,999 outlay. The driving experience is maturing nicely, but the quality and image aren’t. The Evo is its own worst enemy. And against the BMW? Push hard and you will enjoy the 335i more; it’s that bit more mechanically communicative. If that’s your be all and end all, then the Bee-Em is your winner. But it’s not ours. We chose to test autos to highlight the everyday usability of these cars, and with its more progressive ride and superior gearbox, the S4, Audi’s first truly convincing S car, just – just – has the edge. Until BMW gives the 335i saloon a DCT gearbox, at least.