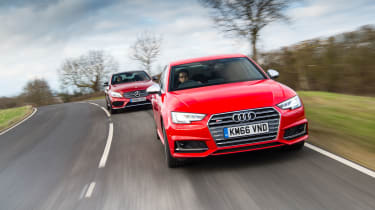 It’s difficult to believe that the Audi S4 and Mercedes-AMG C43 can be so similar on paper simply by coincidence. I don’t want to start a full-blown, Trump-style conspiracy, but is Audi sure its phones haven’t been tapped or there isn’t a mole in AMG’s Affalterbach HQ?

Both of these not-quite-the-full-fat performance versions of Audi and Mercedes’ small saloons are four-wheel drive with automatic gearboxes. There are slight differences though, the Audi has ZF’s trusty eight-speed auto while the Mercedes has nine forward gears. The Audi also has a variable centre diff that distributes torque between the axles while the AMG makes do with a constant 31:69 split from front to rear.

> Read our full review of the new Audi S4

Both cars are powered by V6s with just a single cubic centimetre difference; the S4’s engine capacity is 2995cc while the C43’s is 2996cc. The two engines are both turbocharged, although the C43 has two turbos while the S4 has a single, twin-scroll unit placed within the V of the engine. The Merc’s duet of turbos helps it produce 362bhp, 13bhp more than the S4’s 349. Torque isn’t identical either, with the Merc putting out 383lb ft and the Audi 369lb ft. But if the engines’ figures are a little too disparate to support any theories about espionage, then the results they procure might be similar enough. Each manufacturer claims its car will accelerate from 0-62mph in 4.7sec and both have a limited top speed of 155mph. 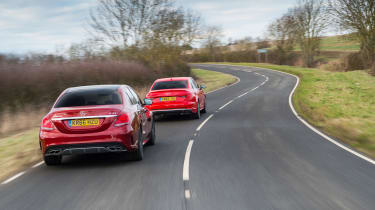 They’re both conventional four-door saloons, but of course both cars do look different; the C43 is a more exuberant looking car, its glitzy grille and flowing lines in stark contrast to the clean and functional design of the Audi. The inside of the Merc is similarly embellished with a large wood-trimmed centre console and aluminium switches, vents and speakers. Any fear the interior might be chintzy from its decorative appearance is quashed by the obvious quality that underlies everything; the wood, leather and metals feel authentic and the switches have a satisfying weight to them.

This feeling of quality continues as you start to drive because, although there’s a firmness to the chassis, much of the harshness from a rough road is filtered out before it makes its way into the cockpit. The C43 feels as though it’s riding on tiny wheels and squidgy high-profile tyres, but its 18-inch rims and 40 profile Dunlop SportMaxx RT tyres are visual evidence to the contrary.

> Read our review of the Mercedes-AMG C43 Coupe and Cabriolet

Initially, the steering feels unnervingly light and it’s all too easy to apply more lock than is necessary. It doesn’t help the C43 feel like a performance car but, even when being ham-fisted with the steering, the Merc has so much grip that it resolutely follows your inputs, really increasing your confidence in the car.

The four-wheel drive system helps generate incredible traction when accelerating, enough to match the front end’s bite on turn in. When combined together the C43 has the ability to achieve an incredible pace down a B-road, but dissecting a corner isn’t a desperately involving task and, other than a slight twitch from the rear on turn-in when provoked, there’s very little adjustment needed. Brake, steer then full throttle is really all that’s required. 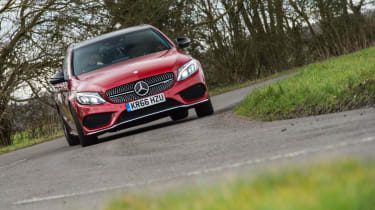 Play around with the driving modes and the chassis becomes stiffer and consequently the ride does suffer. However, it’s clear the C43’s structure is more than up to the task of supporting the firmer dampers as there’s never a creak or rattle from inside. The steering gets heavier too, but there’s no increase in actual feel and it seems oddly sticky after you’ve already adapted to the light steering. Sadly the firmer damper settings don’t suddenly make the C43 any more interactive, but they do help create a better connection with what’s going on between the tyres and the road. Yet an ability to influence the grip never emerges. Without any extra control, the chassis is best left in its softest setting where the ride is better and the body is still managed well.

The biggest change between each driving mode is the noise from the engine, more specifically the exhaust. As you switch from Normal to Sport then Sport+, the engine goes from making a crisp but distant rumble, to a more aggressive bark and then an antisocial blare complemented by pops and crackles. Other than the noise, the engine’s characteristics don’t change; the rev needle pings round the dial with every prod of the throttle and it accelerates through the first third of its nine gears at a remarkable speed.

Like the Merc, most of the Audi’s engine noise also comes from the exhaust. However, what’s emitted from the back of the S4 is a far less rambunctious; it's a much more polite noise. That’s about as much as the two motors differ, as the Audi’s V6 chases the identical 6500rpm rev limit with the same willingness as the Mercedes’. It also feels similarly potent, and you can certainly believe the two might achieve the same 0-62mph times. 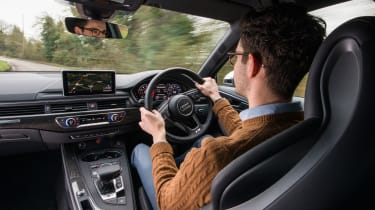 The Audi way of thinking does make for a very different cabin ambience, though. Carbonfibre coupled with black leather and black plastic and buttons makes the Audi’s interior quite dark, while the black roof lining exacerbates that feeling. Quality materials and a tasteful design go some way to make up for the dingy look, but as soon as the Audi moves down the road it's clear there isn’t the same incredible sense of solidity that the Mercedes exudes. The ride isn’t quite as polished and the chassis allows minor shocks to infiltrate the cabin, inducing slight creaks and rattles. The S4 is far from being uncomfortable (the seating position is excellent, for a start) but it can’t match the C43 in terms of luxury.

Where the Audi is comparable to the Mercedes is in pace and grip. Its front axle is unfazed by tight corners and it’s able to generate fantastic traction even with a liberal use of the throttle. The S4 does feel slightly more nimble when entering a corner, and trail braking will generate a slight amount of attitude to help point you towards the apex. Touching the throttle will instantly settle the car to a state where it feels more comfortable, all four tyres gripping the tarmac. 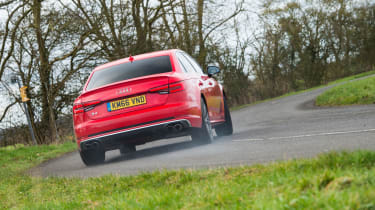 The S4’s driving modes feel even more closely stacked than the similar ones of the Mercedes. Engine noise increases in Dynamic, the steering gets marginally heavier and the suspension firmer. But without such a plush ride to begin with, the Audi’s harder damper settings aren’t worth exploring; like the Mercedes, they too offer no more on-road accessibility.

Separating the way these two cars drive is just a difficult as spotting the differences between them on paper. Both offer impressive levels of pace and security safety, but both are disappointingly inert. The Audi might possess an extra degree of agility in the early phase of a corner, but it requires so much commitment on the road it's rarely noticeable. The sense of quality that pervades every part of the C43, from the ride to the interior, which makes it a more pleasant car to be in and although childish, the noise it makes is more fun. The C43 steals the win from the S4, but only by the closest of margins. 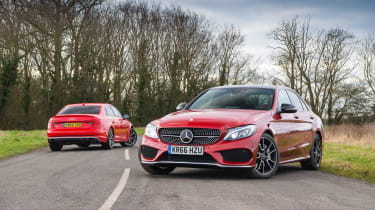 More through fascination than suspicion we decided to test if these two cars were really as close against the clock as they are on paper. Both cars did manage to improve on their official acceleration figures but the more powerful Mercedes managed to beat the Audi from 0-60mph by a mere 0.2sec. However, the Audi’s limiter didn’t cut in until 160mph rather than 155mph, 3mph over where the Mercedes topped out.

Neither car is likely to be considered as a trackday weapon but, as we did venture onto track (albeit briefly), it would be remiss of us to not inform you what they were like. The Audi’s resolutely grippy nature remains, irrespective of what you do to provoke it. The nose darts into corners with the same enthusiasm as it does on the road, but the harder trail braking that the freedom of a track allows liberates no extra agility and the throttle immediately stops play. So, just like its on-road manner, the S4 is capable and fast on track but not the most involving or engaging.

The C43 however becomes a different beast when shown the expanses of an empty track. Corner entry in the AMG is important, and it dictates how the rest of the corner plays out. Stay committed, brake late and carry speed into the corner and the rear will arc wide. Getting back on the throttle hard will simply maintain whatever angle you allowed the C43 to generate at the start of the corner. It will then ride out the drift until either you apply enough opposite lock to neutralise the slide, or it scrubs off enough speed that there isn’t the momentum to maintain angle. However, the C43’s impressive power means that the slide will endure the length of most corners.

Of course show-boating and long slides aren’t in the slightest bit relevant, even if they are entertaining. But this dexterity is useful to help eradicate any understeer and then, as long as you don’t let the slide grow too large and get on the power early, the C43 is also fast and very capable on track. As there’s actually technique to getting the best from the C43, and it’s not a case of point and squirt like the Audi, the results are far more satisfying when you do get it right. 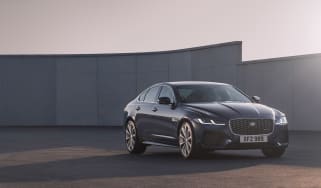