An Audi S4 Avant joins the fleet and Peter Tomalin blags it for a family holiday in the Dordogne. The perfect test 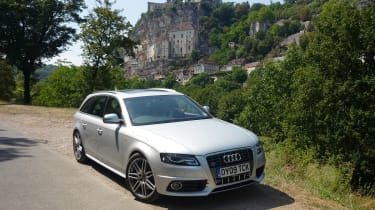 A couple of years ago I ran a BMW 335i Touring. Despite one or two hiccups – like the time it lunched its turbos – I loved it. For someone like me, with kids, dogs and all manner of clobber to lug around, but who still enjoys a spirited drive when the fancy takes them (and doesn’t relish anything too ostentatious), it was pretty much the perfect package. Our new S4 Avant, with its supercharged 3-litre 328bhp V6, has an awful lot to live up to.

OY09 TCK arrived already thoroughly run in with over 3000 miles on its electronic odometer. It’s an S-tronic, which means it’s a dual clutch semi-auto with paddles for when you want to shift manually. Basic list is £35,970, but as with so many press fleet cars it’s specced to within an inch of its life. Priciest options are Audi Drive Select which allows you to tailor things like damping and throttle response (£1290), a ‘technology package’ featuring sat-nav, iPod interface and adaptive cruise control (£2845), an ‘advanced’ parking system (£1030) and a sunroof (£1075), but there’s lots more, from adaptive lights to powered tailgate, and it all adds up to a whistle-inducing £48,280. Cripes. The good news is that in Ice Silver metallic with Black Silk nappa leather, it looks and feels seriously desirable, imbued with the high quality ambience and meticulous attention to detail that have long set Audi apart.

We soon had the ideal opportunity to bond with the S4 – a family holiday in the Dordogne. We crept out of the house at 5.30 in the morning and settled in for the long haul, three kids in the back nursing various iPods and DVD players. As cars get bigger, even an A4 can accommodate a family of five, though elbow room becomes marginal. Fourteen hours and 660 miles later we arrived, tired but far from aching (except for 12-year-old Ben who had the less-than-plush middle seat in the back row). The S4 simply swallowed the distance and returned a reasonable 26.4mpg (on my daily commute it’s been averaging 24mpg) and we did it on exactly two tankfuls, which was neat.

I enjoyed one spirited drive, on the spectacular road up to Rocamadour, but this was not the time to explore the S4’s dynamic repertoire. Instead we enjoyed the gadgets. Some proved surprisingly useful. The mirrors flash a warning if a car is caught in the blind spot (saved us at least one scrape on the Peripherique Est). Hold the unlock button on the fob and all the windows and sunroof open to help cool the interior on a hot day (handy when it’s in the high 30s). Dig deep into the MMI (Audi’s version of iDrive) and you can switch the headlights for driving on the right (saves faffing with sticky patches). So it’s a lovely thing, the S4. But can it match the 335i for driving pleasure too? The next few months will reveal all.