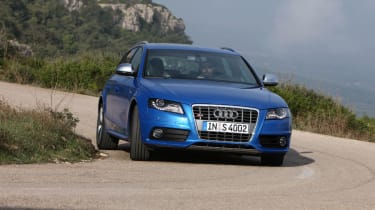 I’ve just done something I have never done before. Which is? Perform repeated powerslides in a production Audi saloon, then more of them in the Avant estate version of the same car.

Shortly before achieving this feat, I learned that this new Audi S4 accelerates faster than its predecessor despite having a little less power (328bhp against 339) and producing a massive 94g/km less CO2 (now a tax-advantageous 225g/km). It will also be slightly cheaper.

Sounds like a miracle to me. Welcome to the new world of intelligent downsizing, of something for nothing. The previous S4 had a 4.2-litre V8 engine as well as the expected quattro transmission, and seldom has such a promising-sounding combination proved such a dull, disengaging drive. Having driven it really fast, you’d get out of the previous S4 and just shrug your shoulders.

This new one has a 3-litre V6 with a supercharger. This, incidentally, means that Audi’s use of the letter T is henceforth a nonsensical red herring, as it has ceased to mean turbocharged – the S4 bears TFSI legends and says V6T on its flanks. The supercharger sits in the vee and makes almost no whine. The engine note has a crisp, potent, almost 911-like quality (being a 90-degree V6, its firing intervals are the same as a flat-six’s and the primary balance nearly as good), and boost is so immediate and progressive you simply perceive a normally aspirated engine with unusually ample torque.

You can have a six-speed manual gearbox or a seven-speed double-clutcher, as quick and smooth in shift as you could wish. With the latter, there’s a tasty, sharp-edged, split-second whoomph with each press-on upshift. You can, and should, also have the £2000 Drive Select option, which has Comfort, Auto and Dynamic settings that affect throttle map, steering weight, damper settings, ESP and – vitally – the activity of an electronic rear differential. You can also choose your own combination of settings.

The quattro system naturally defaults to a rearward torque bias, and if you switch off the ESP you can feel clearly how the electronic diff’s clutches and epicyclic gears apply power to the outside rear wheel to hone a trajectory instead of ESP’s braking of the inside one. In Dynamic mode the S4 powerslides with sublime grace and progression, with crisp, linear steering responses ready to help you flatter yourself.

Did I really just write that sentence about an Audi? Times change indeed. The next RS4 might add a turbo to the supercharger, by the way…