The Audi S4 has been given a facelift - the driving experience stays as before, but economy has been boosted and CO2 emissions have fallen 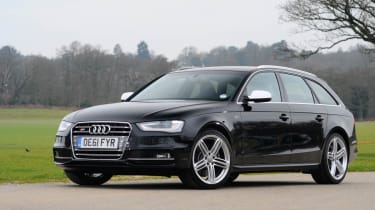 The estate version of the newly freshened Audi S4, driven here in the UK for the first time. Power comes from the supercharged 3-litre V6 that knocks out 328bhp and delivers a claimed 0-62mph time of 5.1 seconds.

The engine is pretty much exactly the same unit that’s been fitted to the S4 since it switched from V8 power back in 2008. Power is unchanged but there are gains in fuel economy and fewer emissions, with the car now claimed to be capable of delivering 33.6 mpg on the standard EU test when working with the now-standard seven-speed twin-clutch transmission – nearly 5mpg better than before.

Suspension tweaks have been limited to new dampers chosen to give a more comfortable ride, and the ‘Drive Select’ controller now also comes with an ‘Efficiency’ mode which knocks back throttle response to boost economy.

As always, the S4 is a brutally effective way of covering ground quickly and painlessly. The 3-litre V6 is a mighty engine, delivering solid urge throughout the rev range and with a pleasingly hard-edged exhaust note cutting in at higher rpm. Despite that, it’s supremely relaxed when asked to cruise at more normal speeds – an 80mph motorway schlep sees the engine turning barely 2000 times a minute in top gear.

Backroad pace is similarly impressive: the S4 grips, sticks and goes pretty much where pointed at anything other than ludicrous velocities. What it doesn’t do is draw you deep into the driving experience. There’s little feedback and – as with other members of the A4 clan – the steering suffers from a strangely artificial weight that makes it difficult to invest full trust in it. At higher speeds, reaching the edge of adhesion results in understeer – at lower velocities the combination of the engine’s urge and the quattro system’s rear-biased torque split means it can be persuaded into brief bursts of power oversteer; although this isn’t a state the car shows any enthusiasm for.

We’ll have to wait for the arrival of the BMW 335i Touring to find an obvious rival to the S4 Avant. That said, the S4’s combination of pace, usability and reasonable running costs means that the forthcoming RS4 Avant will have its work cut out justifying the sizeable supplement Audi will charge for it.

Like the rest of the A4 range, the facelifted S4 is distinguished by new-look headlights, and it also gets some more silver in its radiator grille.

The twin-clutch box works well in both auto and manual modes, but it still struggles to keep up when asked to skip ratios on manual downshifts.

We managed 24.5mpg in rapid, everyday use.