BMW has revealed the new 4-Series Gran Coupe ahead of the Geneva motor show. Details, UK prices and pictures here 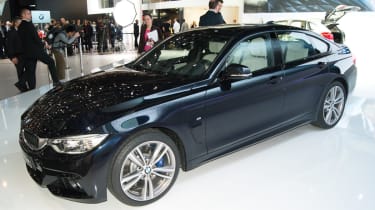 BMW has revealed the new 4 Series Gran Coupe at the 2014 Geneva motor show. Simply put, it's the five-door lift-back variant of the slightly more up-market 3 Series.

Unlike the larger 6 Series Gran Coupe, the 4 Series utilises a more practical hatchback arrangement, more in common with the 3 Series GT. The 4 Series places somewhat more emphasis on styling, with frameless windows to back-up its Coupe moniker.

Engine selection is somewhat more limited than the 3 Series, with the 418d and 420d offering four-cylinder diesel power, and the 420i and 428i offering four-pot turbo petrol power. Currently the hottest model is the six-cylinder 435i with 306bhp. All engines are offered with a six-speed manual gearbox or eight speed automatic. BMW will also offer the 420d in four-wheel drive Xdrive format.

The five-door bodystyle adds approximately 50kg to the weight of a standard two-door 4-Series, and suspension settings are similar, albeit modified slightly from the Coupe. There is extra bracing at the front, which is said to improve body stiffness and steering precision.