Nissan has unveiled the new more extreme RS version of the hot hatch mini-SUV that is the Juke Nismo at the Geneva motor show. 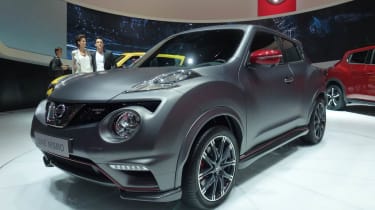 The Nissan Juke Nismo RS has been unveiled at the Geneva motor show. A hotter version of the crossover from Nissan's performance arm, the Japanese carmaker hopes to offer buyers an even more performance focused Juke to fight it out in the hot hatch and hot crossover segments.

Increasing power by 15bhp to 212bhp, the RS Juke also pushes 206lb ft of torque out of its 1.6-litre DIG-T engine, which should see the RS’s 7.8sec sprint to 62mph reduced. To enable front-wheel drive examples to put this extra power down, a mechanical limited-slip diff is offered as standard, whilst optional four-wheel drive versions use torque-vectoring instead.

Those four-wheel drive examples are also fitted as standard with Nissan’s Xtronic CVT eight-speed semi-auto gearbox, which uses steering-wheel mounted paddles for gear changes. Front-driven RSs instead feature a standard manual six-speed ‘box, an ingredient we really liked in our drive of the less potent Nismo.

The Nismo RS also comes equipped with larger 320mm front disc-brakes, ventilated rear discs and a retuned exhaust to offer a sportier engine note – which coincidentally was an area we felt was lacking in the Nismo. Receiving the motorsport department’s treatment has also resulted in further body stiffening and an uprated suspension setup to sharpen the handling of the hottest Juke.

Visually, changes from the Nismo are subtle, though the Juke RS does gain new front and rear bumpers, RS badging inside and out as well as new 18-inch alloys and a thicker tail-pipe. The interior features new suede Recaro sports seats and carbon-fibre look plastics, whilst the sports steering-wheel and trims from the Nismo remain.

Priced at £20,495 the Nismo contributed to three per cent of all Nissan Juke sales in Europe, meaning there is clearly a market for the hot crossover. But, with such a variety of focused hot hatches on the market offering fast pace and practicality, the Nismo wasn’t necessarily the choice for us enthusiasts. This more focused and undoubtedly pricier RS version might just be what was needed to drag the Juke back into the evo realm.

The Nismo RS has been launched alongside a facelift for the Juke range, which has been around for four years now. The model's huge success has ensured the redesign is subtle, with a handful of small headlight and bumper tweaks. Instead, the focus has been on increasing boot space and adding new engines to the range, with a 113bhp 1.2-litre turbo petrol engine joining the options and providing a peppier alternative to the Juke's 1.6-litre naturally aspirated unit. UK sales start in the summer.