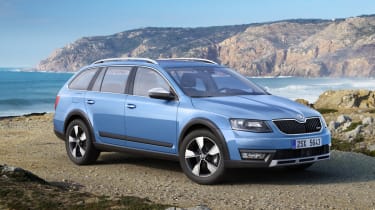 Skoda has confirmed it will be unveiling its new Octavia Scout to the world at this year’s Geneva Motor Show in March. Based on the Octavia Combi, the Scout will add all-wheel drive and off-road extras to the German-Czech family estate.

Powered by a choice of two 2.0 diesel engines or the most powerful 1.8t petrol, the Scout’s four-wheel drive system makes use of Haldex-5 electronically-controlled multi-plate clutch technology, to increase traction by 25 per cent compared with the standard front driven Octavia.

Much like other VW Group four-wheel drive offerings, the front biased setup can shift power to the rear during low grip scenarios or under heavy load. Combined with a 33mm increase in ride height, unpainted bumpers and arches, as well as protected and raised undersides for the nose and rear, the Scout is far more suited to getting muddy than conventional estates.

The Scout further separates itself from the rest of the range with standard 17-inch alloys and a model-specific interior, adding comfort, practicality and a hardened style to the most adventurous Octavia.

Prices remain unconfirmed but using the previous generation as an example, the more capable Scout will likely command a modest four-figure premium on top of the standard estate’s price.