Peugeot's latest 108 city car has been unveiled ahead of the Geneva motor show. Pictures and details here 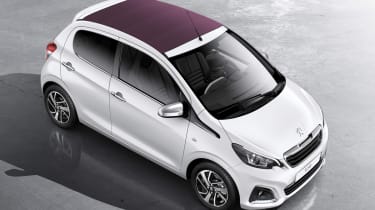 Peugeot has released pictures of its new 108 hatchback ahead of its public unveiling in Geneva next month.

The compact city car is just 3.47m long and 1.62m wide, directly challenging the latest rear-engined Renault Twingo as well as the well-established VW Up, Skoda Citigo and Seat Mii. Short overhangs and a 9.6m turning circle should also mean parking in tight urban spaces will be a doddle.

Just like its predecessor, the 108 has been created in partnership with Citroen and Toyota, with those two manufacturers also planning to reveal their versions of the city car at the Geneva Motor Show in March.

Peugeot’s take on that platform offers high levels of customisation, whilst mirroring its larger 208 with vastly improved interior quality and a more modern design. Contributing to an up-market feel is keyless entry, a starter button, climate control, as well as heated electric mirrors and a 7-inch touch-screen.

That screen can also mirror your smartphone’s interface, with Peugeot’s MirrorLink technology enabling phones running on Android, RIM and Windows to connect directly with the screen, whilst iPhones running iOS can connect via AppInCar technology. This technology also integrates with voice command, so drivers can operate their phones without taking their hands off the wheel.

To bring the 108 options list into line with rivals Renault’s Twingo and Fiat’s 500c, for the first time Peugeot’s smallest car is also available in open top form. Called the 108 TOP!, the open top car features an electric control switch for a retractable roof, whilst an aero-acoustic deflector prevents excessive wind noise from penetrating the cabin.

A parcel shelf that folds against the rear window and 196-litres of boot space (180 with a spare wheel), emphasise the 108’s focus in being practical, whilst a vast range of colour, trim and ‘interior ambience’ choices ensure personalisation isn’t compromised. TOP! drivers will even have a choice of fabric colours for the roof.

Available in both three and five door variants, the 108 will come with a choice of four petrol engines: three 1-litre engines and one 1.2-litre, the latter producing 82bhp and 99g/km of CO2. This means the entire 108 range will be tax-exempt.

After its Geneva Motor Show unveiling, the new Peugeot 108 will go on sale from July 1.