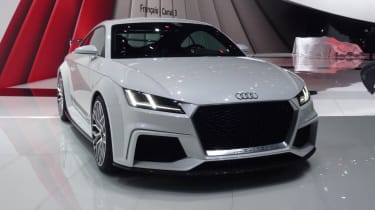 Extracting a mammoth 414bhp and 331lb ft of torque from its 2-litre TFSI engine, the four-wheel drive TT can sprint its way up to 62 in just 3.7secs. With that performance the car’s four-pot produces the equivalent of 207bhp per litre; almost double that of the naturally aspirated R8 V10 Plus and even more than the Le Mans winning R18 TDI race car.

Equally significant is the turbo-charged engine’s light weight, tipping the scales at just 150kg, whilst removal of arm rests and speakers in the car’s cabin have also helped the concept to weigh in at 1344kg. Combined with Quattro all-wheel drive and an S-tronic dual-clutch gearbox, the Concept’s performance will likely be extractable at almost all times in typical Audi Sport manner.

With the third-gen TT still hot from the attention of the press, it was perhaps a brave move for Audi to unveil the more hardcore Quattro Sport Concept in Geneva. Larger 20-inch alloys, wide air intakes, a honeycomb front grill and butch, race-style body kit help to create an angry stance that makes the standard TT almost look soft. Though the addition of a carbon-fibre-reinforced plastic splitter and diffuser, girthy twin-tailpipes and large rear spoiler ensure the Concept looks more purposeful but unsurprisingly less handsome than the standard Mk3 TT.

Despite losing a few creature comforts, the car’s interior does gain space for two-racing helmets, bucket seats with black four-point harnesses and a repositioned start/stop button on the steering wheel. The wheel also holds controls for the car’s 12.3-inch TFT display – also in the standard TT – meaning the driver can maintain full control with both hands at all times.

With no mention as to whether this hot TT will ever make production, the Quattro Sport Concept will likely be the influence for a future TT-RS. If it looks as good as the Concept looks, we certainly can’t wait to drive one.