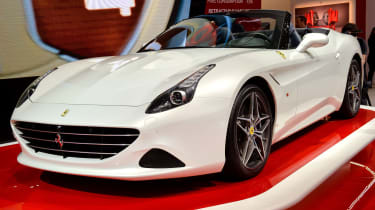 The second major update for the convertible Ferrari California model, introduces a new twin-turbocharged V8 engine to the range, as well as a significantly re-styled front and rear end. Making its debut at the Geneva motor show, the new California is the first turbocharged Ferrari since the F40.

Ferrari is claiming that the new engine, a 3855cc direct injection V8, has ‘virtually no turbo lag’ thanks to a new Variable Boost Management system, and that it has ‘the most exhilarating soundtrack any turbo has ever yielded’. Torque rises by 49 per cent over the outgoing model, with fuel consumption down by around 15 per cent. Performance is also improved, with 0-62mph coming up in 3.6 seconds (down from 3.8), with a top speed of 196mph (up from 193mph).

Ferrari will build the new engine in the same factory as the twin-turbo Maserati V8, but the company is quick to point out that it’s far from the same engine. Although it undoubtedly has commonality, the engine is slightly larger in capacity, and features a flat-plane crankshaft for optimum performance. Peak power and torque comes much later in the powerband too, with 552bhp at 7500rpm and 557lb ft at 4750rpm. Full engine details will be released at the Geneva motor show.

Dynamic improvements include a revised steering rack and suspension set-up, which are said to have ‘reduced steering wheel activity’. Revised springs, and the latest generation Magnaride dampers – with a 50 per cent faster reaction time – reduce roll and improve body control. The latest generation F1-Trac traction control system is also said to increase acceleration out of corners.

Changes to the body include a new front bumper with deeper front air intakes and a new-look grille. The bonnet also gains new vents, and at the rear, a new triple-fence diffuser has been added to improve high-speed stability. Inside there's a new central display, called the Turbo Performance Engineer, which displays various information such as, we imagine, boost pressure. The update also brings a new touch screen multimedia system, with a 6.5-inch screen.