The Koenigsegg One:1 has more power than any of its hypercar rivals and a whole heap of impressive technology 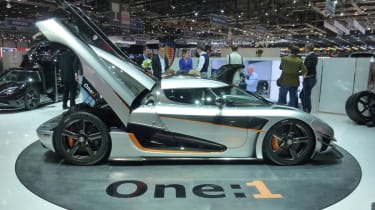 Performance details of the new Koenigsegg One:1 have been revealed at the 2014 Geneva motor show. It’s so called because it’s the world’s first production car to equal its kerb weight with horsepower, its 1341kg matched by 1341 metric hp, which is the equivalent of 1322bhp. It’s also the equivalent of 100kW, or one megawatt, Koenigsegg dubbing this the ‘world’s first megacar’.

That’s more power than the Bugatti Veyron Super Sport, Ferrari LaFerrari, McLaren P1 and Porsche 918 Spyder, and the equivalent of around three Porsche 911 GT3s, our 2013 Car of the Year.

Power comes courtesy of a 5-litre twin-turbo V8 engine, based on that which produces 1140bhp in Koenigsegg’s Agera R supercar. It drives the rear wheels through a seven-speed twin-clutch gearbox and an electronic differential. Performance claims are seriously impressive; a top speed of 273mph would top the 270mph Hennessey Venom GT and 268mph Veyron if proven, while 0-248mph (0-400km/h) is completed in around 20 seconds, the car then braking to a stop in half that time.

It’s not all Top Trumps-winning numbers, though. The technical spec is a brimming with intriguing claims. Claims such as 2G cornering on road-legal cup tyres. And how does GPS-controlled active chassis control sound? The One:1’s carbon chassis is 20 per cent lighter than the Agera’s, while there are carbonfibre vented memory foam seats, a 3G connection for a plethora of lap time and perfomormance recording software and a noise cancelling seat, which uses the engineering inspired by posh headphones to make the interior a more calming environment, should you wish. There’s also fully active aerodynamics via front splitter flaps and a hydraulically actuated rear wing.

Perhaps topping the lot, though, is the use of 3D printing for numerous parts of the One:1, including the variable turbo housing and the titanium exhaust end piece, simultaneously saving weight and adding tech kudos.