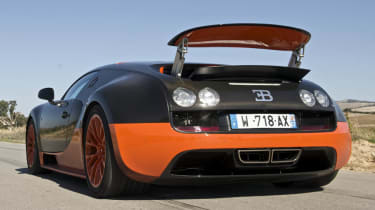 10
Evo rating
These clips are just a taster for our big Bugatti Veyron Super Sport video, due soon...

Subscribe today to have every issue of evo delivered straight to you. You'll SAVE 39% on the shop price, and get evo for its original cover price for a whole year!
Subscribe now
What is it?

The Bugatti Veyron Super Sport is the fastest, most expensive car on sale. It costs around £2,000,000, has 1183bhp instead of the standard Veyron’s 986bhp, accelerates from rest to 186mph in 14 seconds, and has recorded a two-way average of 268mph (though customer cars are limited to 258mph).

Technical highlightsNo question, the heart of the Super Sport is its phenomenal, 8-litre, quad-turbo W16 engine. Changes compared with the ‘regular’ Veyron engine include new, larger turbochargers, freer-flowing inlet manifolds, remapped ECU and bigger charge-coolers. Together these changes lift peak power from 1000 to 1200PS (1183bhp in old money). According to the engineers it’s easily capable of even greater outputs, but the seven-speed dual-clutch gearbox couldn’t reliably handle them.

Does it actually feel any different to the standard car? I won’t lie and tell you that it’s immediately obvious, but all it takes is a few minutes’ sustained effort and you understand what’s going on.

The chassis is sharper. It responds to all inputs more directly, though there isn’t the compromise in ride and body control you might expect. In fact the car is beautifully damped over even the roughest surfaces and reminds you why the Veyron is a car apart from other hyper-projectiles. It’s designed to be used on the street – which is where its on-demand pace is quite other-worldly.

The power delivery is more severe, too. There’s more lag low-down – and then an even more abrupt head-butting of the horizon between 3000 and 6000rpm. It’s completely compelling at these engine speeds, intravenous class-As with Ettore’s name stamped on the hood.

Dusty Spanish roads didn’t help extract the performance on our test drive, nor did the knowledge that three seconds on full throttle equals trouble with the law.  How does it compare?The SS is the very finest high-performance engineering statement. Not as loud or brash as Italian hypercars – perhaps not as emotional – but faster and better than them all. Anyone who calls it ‘boring’ hasn’t had their vertebra squashed by one. Anything else I need to know?At 268mph the centrifugal force at the rim of each wheel is so great that Bugatti had to fit a second spring inside each tyre valve, otherwise the valve would open very slightly, causing a slight drop in pressure.