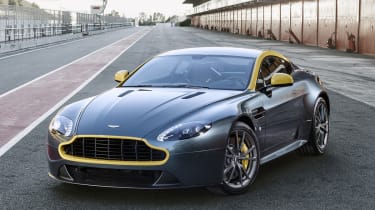 Using the Geneva motor show as its launch-pad, Aston will pull the covers off a race-inspired V8 Vantage N430 as well as a visually enhanced DB9 Carbon Black and Carbon White.

Aston says the V8 Vantage N430 has been developed to bring ‘track-honed excitement to the road,’ with the legendary marque using its wealth of GT racing experience and countless laps of the Nurburgring to tune to the car into a road legal racer.

In order to justify this racer status, the N430 has received a power hike to 430bhp, pushing performance figures into line of the equally powerful Vantage S model. 20kg has also been saved thanks to carbon-fibre and Kevlar seats and ten-spoke forged-alloy wheels.

Mated to its uprated V8 will be a standard six-speed manual gearbox, emphasising the car’s driver appeal and meaning those who enjoy slicing through the cogs of a proper ‘box can leave the options list unticked. Drivers hunting for lap times can specify the close ratio seven-speed Sportshift automated manual gearbox with short final-drive ratio, which despite not winning us over in earlier Vantages, will allow maximum attack on track.

Providing confidence for that commitment will be a 15:1 quick-ratio steering rack – 2.62 turns lock-to-lock – and carefully calibrated double-wishbone suspension, giving the N430 the pointy nose and agile dynamics. Aston Martin claims that the suspension may be performance focused, but it will remain rewarding on road too.

To further increase driving involvement, Aston has fitted the N430 with a sports exhaust that will offer a wider range of audible pleasure from the bellowing 4.7-litre V8. The brakes will receive an overhaul too in order to deal with the added power, as well as the no-doubt higher corner entry speed thanks to GT-4 derived aero.

All of this adds up to create a car capable of reaching 60 in 4.6 seconds – a tenth quicker than the standard Vantage – and powering onto a top speed of 190mph.

Unsurprisingly these performance upgrades are coupled with performance orientated styling to give the souped-up Aston the racier look of its character. The chrome of the standard car is replaced with black, whilst graphite wheels, DBS style clear rear lights and UK standard Club Sport racing livery (inspired by the CC100 Speedster and DBR1 race car) mean the N430 certainly looks the part.

Climbing inside, the car gains machined carbon sill plaques, N430 seat logos, black magnesium paddles or a carbon-fibre gear lever surround (depending on gearbox choice), a leather or Alcantara steering wheel (depending on which box buyers tick) and unique seat trim patterns. Probably the least racy addition but unique to the N430, is the option of a 1000W Bang & Olufsen BeoSound audio system; although the sound track of the 430bhp V8 will probably suffice.

The second car to be revealed in Geneva will be Aston’s DB9 Carbon Black and Carbon White special editions. Unlike the N430, the mechanically standard DB9 will receive a raft of visual upgrades to give it added ‘style and visual drama to emphasise the timeless GT’s sporting nature.’

The Carbon Black achieves a stealth look with its paintjob and dark carbon features, whilst the Carbon White contrasts these features with its striking Stratus White paintjob. Both look aggressive as ever with their massive wheels to give the V12 DB9 an imposing look that matches its high-performance abilities.

Gone too are the chrome window surrounds, in their place are black surrounds accompanied by carbon-fibre side strakes. Climbing into the cabin will bring a wealth of ‘accent colours’ into view, matching exterior design such as the brake calipers. Carbon fibre also continues inside, whilst bespoke sill plaques with Carbon Black or Carbon White logos remind passengers of their DB9’s added exclusivity.

Due to the fact that the Carbon Black and White editions only undergo visual changes, these special edition DB9s will still posses the standard car’s 510bhp and 457lb ft of torque, meaning Grand Touring strengths remain uncompromised.

Aston has confirmed that prices for these special edition DB9s are only being revealed to potential buyers on request at its dealerships.