Gumpert, creator of the mighty Apollo, has produced a new Audi-based Coupe called the Explosion. Details and pictures here 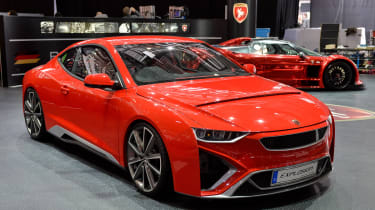 Gumpert has revealed an all-wheel drive 414bhp super-coupe to the public at the 2014 Geneva Motor Show.

Extracting 414bhp and 383lb ft of torque from its turbo-charged 2-litre engine, the Gumpert Explosion stretches a staggering 107bhp per-litre from its four-cylinder. Said to be based on an Audi, the Explosion matches the power outputs of the recently unveiled TT Quattro Sport Concept, with which it most likely shares its engine.

Unsurprisingly the man behind Gumpert, Roland Gumpert, originally worked at Audi, where he headed up Audi’s legendary 1980s rally operations. With his latest creation he almost harks back to that time, although quite possibly it was also his former employer that had provided him with the base to bring his company back to life after its mighty Apollo struggled to sell.

Keeping the Explosion’s weight to a minimum will be a tubular-frame, carbon-fibre chassis and aluminium and fibreglass bodywork. With all-wheels driven the lightweight super-coupe races its way up to 62mph in 3.0secs, and onto a top speed in excess of 186mph. An S version is also planned with even more power; an added cylinder bringing capacity up to 2.5-litres, producing a staggering 495bhp and 461lb ft of torque.

Orders for the Explosion are being taken now, the car going for a price tag of around £86,000 (105,000 Euros before tax). This places the Gumpert in direct competition of some very established cars, not least the £76,610 Nissan GT-R, a car which many label as the ultimate super-coupe. Whether Gumpert can take on Godzilla remains to be seen, but there’s no doubt the Explosion provides a lot of bang (sorry) for your buck.