The Maserati Alfieri concept was shown at the 2014 Geneva motor show, and now it's confirmed for production 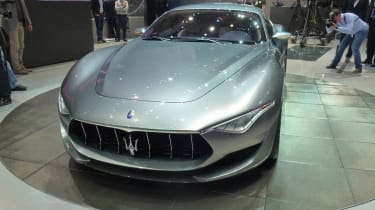 Maserati has revealed that the Alfieri sports coupe will make production by 2016, with a drop-top version following in 2017. Unveiled at the 2014 Geneva motor show, the stunning 2+2 coupe harnesses power from a 3-litre V6 available with three power outputs driving either the rear or all-four wheels.

The entry level rear-driven car, available from around £60,000, will produce 404bhp, whilst the range topping all-wheel drive cars will be available with more potent 444bhp or 513bhp units. Both the coupe and cabrio versions will share the same engines.

Announced by CEO Harald Wester at a Fiat-Chrysler Automobile presentation outlining future group plans, the Alfieri is set to take on established competition such as the Porsche 911 and Jaguar F-type. The concept’s exterior boasts sharp lines and a shark-like nose, while its striking interior possesses a floating dash and magnified dials. Happily, it doesn’t look too far off production-ready, the underpinnings shared with the impressive GranTurismo MC Stradale.

The new car could be built in Grugliasco, Italy (near Turin), in the same plant that the Ghibli and Quattoporte are built. The marque’s other two current models, the GranTurismo and GranCarbio, are currently built in Modena.

Wester also announced that the Alfieri joined by a second new car in Maserati’s lineup, the Levante SUV arriving in 2015, before the current GranTurismo four-seater will be replaced in 2018. This is part of a larger plan to increase Maserati’s sales to 75,000 cars by 2018, a substantial increase of nearly 60,000 compared with 2013. This could result in revenue increasing to around 6 billion euros – around £4.9 billion - in 2018.

It looks likely that we’ll also see more eco-friendly cars from Maserati in the future, the brand hoping to offer a quintessentially Italian alternative to luxury German brands.

Video from the 2014 Geneva motor show below: