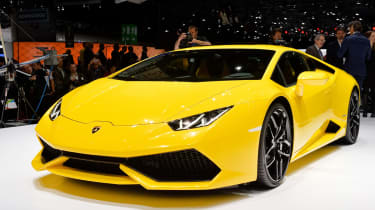 The Lamborghini Huracan, the company’s Gallardo replacement, has been unveiled at the Geneva motor show. The Huracan remains naturally aspirated, using an evolution of the Gallado’s V10 engine, sharing the same 5204cc of swept capacity but with both direct and indirect fuel injection to combine both power and the all-important emissions compliance.

The result is an engine that delivers a peak 602bhp at 8250rpm, with 290g/km of CO2 and the ability to meet Euro 6 out of the box. The peak 413 lb ft still arrives at a peaky 6500 rpm, but direct injection has beefed up the torque curve at lower revs.

Its proportions are very similar to the Gallardo too, but the styling owes a fair amount to the Aventador. The design team have played on Lamborghini’s attachment to six-sided shapes, which are everywhere from the side window graphic to the shape of the cabin’s airvents.

From the back the standard car looks strangely under-endowed when compared to the wing-wearing variants that marked the end of Gallardo production; the inevitable plethora of harder-cored versions that will follow the ‘standard’ LP610-4 will doubtless redress the balance. Impressively, the car manages to produce 50 percent more downforce than the Gallardo despite its lack of wingwork, and with no moveable aerodynamic surfaces.

The interior is very different from the Gallardo, with a heavily sculpted dashboard and a deep centre console that no longer needs to accommodate a manual gearchange. Conventional instruments have been replaced by a large 12.3-inch TFT screen that can be configured to give priority to either the rev counter, the speedometer or the satnav screen.

Control stalks have gone – Lamborghini has taken a leaf from Ferrari’s book and moved controls for the indicators and wipers onto the face of the steering wheel, allowing extra-large gearchange paddles. The steering wheel also has a button for the switchable driving modes – ‘Strada’, ‘Sport’ and ‘Corsa’.

It’s under the surface that the Huracán gets more radical. The bodyshell is constructed from both aluminium and carbonfibre, with the ‘backbone’ that runs down the centre of the floor, the back of the sills, the rear bulkhead and the ‘B’ pillars that join this to the roof all made from composite that’s bonded and riveted to the alloy structure. The shell is 10kg lighter than the Gallardo’s, but 50 percent more torsionally rigid.

Mechanically the biggest change is to the transmission, rather than the engine. The continuation of the V10 motor gives welcome proof that Lamborghini has kept the faith with natural aspiration. Indeed, R&D boss Maurizio Reggiani insists that the company will avoid turbocharging until emission standards make it absolutely necessary.

Perhaps inevitably, there won’t be a manual gearbox option, owing to the fact that by the end of Gallardo production, demand was close to zero. The Huracan switches to a new seven-speed dual-clutch gearbox, and another three-letter acronym joins the lexicon of such systems – Lamborghini Doppio Frizione or LDF. Surprisingly, this is unrelated to the double-clutch in the ‘S-Tronic’ R8. This then drives all four wheels through an all-new four-wheel drive system based around an electronically controlled clutch rather than the Gallardo’s viscous coupling. This is faster acting and, although the normal split is 30 percent front and 70 percent rear, it can send up to 100 percent to the back or up to 50 percent to the front.

Lamborghini has only given us a ‘dry’ kerbweight for a car that, as the release puts it, is fitted with ‘lightweight options.’ That’s 1422kg, with 42 percent resting over the front axle when static.

The LP610-4’s raw performance figures are only fractionally better than the Gallardo’s – 3.2-sec 0-62mph, 9.9-sec 0-124mph and a top speed ‘better than’ 202mph, but we’re told the main target for the development team was lap time rather than straight-line pace, and that its ‘at least’ 3 seconds quicker than the Gallardo around the handing track at the Nardo test site in Italy.