McLaren has shown the new 650S ahead of its official launch at the Geneva motor show. Pictures, specs and exclusive video here 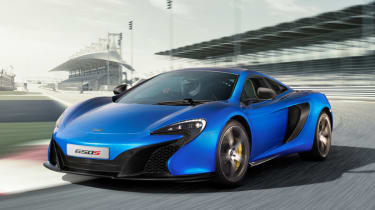 Ahead of its official launch at the Geneva motor show next week, McLaren has released full details of its new supercar model, the 650S. Based on the 12C, the 650S brings a re-styled front end, which takes obvious inspiration from the P1.

The new model will sit above the 12C, gunning for the 458 Speciale, and features a new version of the M838T 3.8-litre twin-turbo V8 engine. Power has been increased from 616bhp to 641bhp, with torque now pegged at 500lb ft, enabling the 650S to complete 0-60 in 3.0sec before reaching 124mph in just 8.4sec – a whole second quicker than the iconic McLaren F1. This is thanks to McLaren uprating the pistons, valves, exhaust system and a few other components, meaning more than ten per cent of the engine’s internals are different to the 12C. McLaren claims a combined 24mpg alongside 275g/km CO2 emissions, figures similar to the 12C.

Perhaps one of the most interesting things about the 650S is the new electronic systems, which promise added adjustability, and more controllability during oversteer. Combined with the new suspension settings, which bring 22 per cent stiffer front and 37 per cent stiffer rear springs (although with damping adjusted to maintain ride comfort), the 650S is said to bring a new level of fun and adjustability on track.

Revised carbon ceramic brakes have also been fitted, which are said to have a nicer feel at the top of the pedal, something the 12C’s carbon brakes have been criticised for in the past. Wrapped in Pirelli P Zero Corsas will be unique lightweight alloy wheels, helping to keep unsprung weight to a minimum. This set-up enables the 650S to come to a stop from 62mph in just 30.5metres, half a metre shorter than its Ferrari 458 Speciale rival.

McLaren’s seven-speed dual-clutch ‘box remains the same, but there are some significant software changes to add a further level of refinement. Smoother starts and low-speed automatic changes are coupled with a new sport mode. Track mode has also been re-calibrated for faster changes, which is used when full performance is required.

The 12C’s carbon fibre ‘MonoCell’ monocoque remains, and so does the majority of its bodywork, including the rear wings and the roof. The rear of the car has been restyled, taking its inspiration from the 12C GT3 car, and the front is clearly taken straight from the P1. Along with the new ‘door blades’ and larger air intakes, the new aerodynamic package is said to increase downforce by 40 per cent at 150mph.