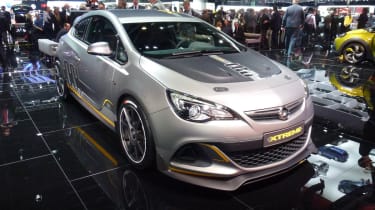 The Vauxhall Astra VXR has been treated to a hardcore upgrade courtesy of the VXR Extreme, unveiled at the 2014 Geneva motor show. It appears to take inspiration from a hot hatch classic, the Renault Megane R26.R, and like that car, it has been honed at the Nurburgring, and could be chasing to steal the lap record from the newly crowned SEAT Leon Cupra.

At 296bhp, its power output is up 20bhp over the standard Astra VXR, making this the most powerful front-wheel-drive car in Vauxhall’s history. The front wheels are driven via a six-speed manual gearbox and a mechanical limited-slip differential.

The boost in power goes hand in hand with a 100kg cut in weight, achieved in numerous ways. A carbonfibre roof weighs less than a third of its steel equivalent, at 2.6kg, while the use of aluminium for the front wings cuts weight from 2.2kg to 0.8kg apiece. The rear wing, diffuser and bonnet are among a list of components made from carbonfibre to further reduce mass and improve aerodynamics.

Perhaps the most extreme change, though, is the one most reminiscent of that Megane. The rear seats have been ditched, replaced by a roll cage, while Recaro bucket seats with six-point harnesses sit up front.

There’s no word on performance figures, and how the standard VXR’s 5.9sec 0-60 time and 155mph are bested, but expect around a five per cent improvement for each number.

A production run hasn’t been confirmed, but with a Nurburgring endurance racing car as its base, everything about the Extreme is plausible, suggesting a limited-run model to boost the Astra VXR’s credentials in a bustling hot hatch class.