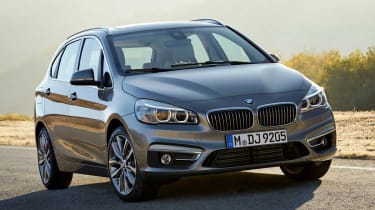 BMW has revealed the 2-Series Active Tourer, the company’s first front-wheel drive model, ahead of the Geneva motor show. The new car is a five-seater mini MPV is part of BMW’s future plan to launch a full range of front-drive models, opening up new markets for the company.

Underneath the BMW’s new body, lies the same platform as the new F50 Mini, albeit slightly extended. It will be launched with a version of the same 1.5 three-cylinder turbocharged petrol engine in the 218i. The top-spec four-cylinder petrol turbo 225i, which produces 228bhp as in the Coupe, will make an appearance slightly later. Performance from the top model won’t disappoint, hitting 0-62mph in 6.8secs going onto a top speed of 148mph.

There will be just on diesel option at launch, the 148bhp 2.0 four-cylinder 218d. A wider range of diesel options are expected by early 2015. All models come as standard with a six-speed manual gearbox, with six or eight-speed automatics available as options.

The interior features five seats as standard, although a seven-seat option will be available. The car makes use of its new front-wheel drive layout to increase interior space and practicality, with new sliding and reclining rear seats.

Three model lines will be available, the basic Active tourer, Luxury or sportline. M Sport suspension can be specified, which drops the ride height by 10mm, as well as offering active dampers. An xDrive four-wheel drive version will also be available in the UK shortly after launch.

Directly rivaling the Mercedes B-Class, the Active Tourer will be available in the UK from around September, with order books open now. Prices are expected to start from around £23,000, with more details to be revealed at the Geneva motor show next month.