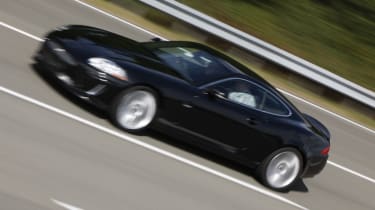 Jaguar’s had a rather strong 2009. This year has seen the launch of the potent new XFR and XKR performance cars, each equipped with the firm’s new 503bhp 5-litre V8, while the more standard XF range has gained new, more powerful diesel engines. The striking all-new XJ has also been shown to the world for the first time.

Still, not everyone is convinced by the more modern Jaguar range, with many of the company’s more traditional customers sticking to their regular XKs. Step in Jaguar’s Racing Heart experience days, the chance to pop along to its Gaydon test facility and sample the new cars as well as get an insight into how they are developed.

It’s also a fantastic chance for a bit of advanced driver training, which is why I joined one of Jag’s driving days and had a go myself.

My first activity was in a 3-litre XF Diesel S, the car that perhaps challenges Jaguar traditionalists’ perceptions most with its modern styling and oil-burning engine, but their doubts should be put to bed with some slalom and lane change work, showing how tidily the XF handles. It was followed by a more than brisk lap driving Gaydon’s emissions track; ignore the name, it can be treated as a high-speed bowl, with plenty of straights to utilise the V6’s 443lb ft of torque. That’s not far off the total of the supercharged XFR.

That was the car I was bundled into next, with 2009 Renault Clio cup champion Phil Glew as my instructor. We were straight back on the emissions track, and on the main straight passed the 155mph electronic speed limiter to hit a tad over 165. Not too shabby…

Quicker still was the new XKR, which uses the same 503bhp engine but weighs a useful 140kg less. Cue a top speed past 170mph and a much nimbler experience when I tried both back-to-back on a high-speed slalom. I was more enamoured by the XFR, though, despite the XKR’s rather less muted exhaust note.

The next segment saw a trip onto an artificial ice road in a regular diesel XF, having several goes with the car’s electronics in various states of play – traction control on, off, and in winter mode. With everything switched off, the road’s impassible while flicking the ‘on’ switch leads to slow and frustrating progress. Winter mode, though, lives up to its name and makes ice driving a breeze. And the great thing about a closed facility is you can use it to partake in some slow, balletic drifting with no fear of the consequences. Excellent.

Topping off the day was a spot of lunch and a maximum attack lap of Gaydon’s circuit in the passenger seat of a 5-litre XK, with a pro driver at the helm. Not in that order though, thankfully.

I’m not sure how much I developed as a driver at Gaydon, with each activity brief and the conditions fairly sanitised due to the number of people taking part and the fact we were sharing trackspace with development cars and drivers. It was blooming good fun, though, and the cars were absolutely cracking for the job, the Rs especially. I can’t imagine anyone drove their XK home unimpressed…