Wraps pulled off new XJ sports saloon at Frankfurt; evo has a ride in it 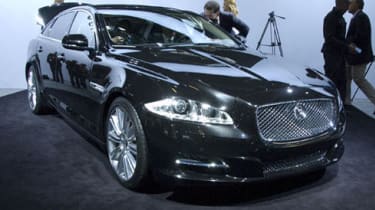 One of the big unveils of the Frankfurt show is this, the all-new Jaguar XJ. It's easy to forget that this is the new sports saloon's big 'hello', with the first pictures of it released back in July.

It's not a car we'd had a chance to get familiar with yet, though. The good news is that it's a belter - while the looks have caused an awful lot controversy, they work distinctly better in the metal than in pictures, and in the numerous colours that can be spotted around Frankfurt (especially black) it's a properly striking and modern piece of design.

We even got a quick ride in one - the range-topping Supersports, with the 503bhp V8 engine from the Jaguar XFR - and were impressed. The interior is worlds apart from XJs of old, yet still retains some of their identity, despite obvious inspiration from the XF and some really modern touches. The TFT dials that mimic real things (and glow red when you stick the gearbox and dynamics into sport mode) are particularly cool.

It's quick, too, and feels light on its feet even compared to the smaller XF, which is actually heavier. Thank the XJ's aluminium structure for that. Engine options will range from the firm's 271bhp 3-litre V6 diesel to the supercharged 503bhp 5-litre, with prices kicking off at £52,500. Order books are open now.

Browse the rest of our Frankfurt motor show coverage