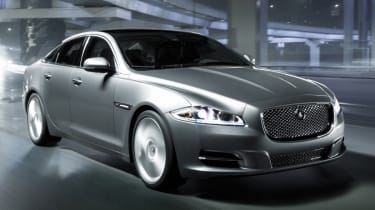 The new Jaguar XJ is finally here, and it’s pretty safe to say it’s a different animal to the outgoing car. While Jag’s luxury saloon has always attracted plenty of praise, it’s often struggled to shrug off its ‘old man’ image.

No such worries this time around. It’s over 40 years since the XJ first appeared in Jaguar’s range, yet 2009 sees the first major change in styling direction since. Gone are the low, sleek curves and twin rounded headlights – in comes a front end reminiscent of the popular C-XF concept and a high and controversial tail with vertical, Lancia Delta-esque rear lights.

It’s another Ian Callum design, with clear links between this and his efforts at fellow Brit prestige brand Aston Martin. None of his previous efforts have sparked as much debate as this car will, though.

In the words of Jaguar MD Mike O'Driscoll – ‘These are truly exciting times for us at Jaguar. The new XJ is truly beautiful, exhilarating to drive, and with its bold, enlightened approach to design, it meets the challenges of our fast-changing world. It re-imagines the ultimate sporting luxury car.’

Head inside and the interior represents another departure from traditional Jag values, with a host of technology moving the game on from the XF saloon’s fantastic inner quarters. There’s high-definition virtual instruments as well as a ‘dual-view’ touch screen that enables the driver to view sat nav and vehicle functions while a passenger sits enjoying DVDs.

Not that the driver should feel left out – there’s dynamic tech in the shape of variable damping, active differential control and quick-ratio steering as well as a kerbweight kept down by Jag’s aluminium spaceframe chassis, to the benefit of handling. Impressively, the XJ weighs at least 150kg less than its direct rivals.

The fantastic engine range from the Jaguar XF is present and correct, with the 271bhp 3-litre V6 diesel and the 5-litre V8 petrol in naturally aspirated 380bhp and supercharged 503bhp guises. The latter comes from the superb XFR, but won’t be the basis of a new XJR. Instead we get a range-topper in the form of the £85K V8 Supersport.

If that sounds mightily expensive, fear not. Prices begin at £52,500 for a V6 diesel Luxury with V8 petrols kicking off at £62,900. If you want to go long wheelbase and add an extra 125mm then factor in an extra £3K. The new Jaguar XJ is available for order now, with deliveries beginning early in 2010. Plenty of time to get used to that shape, then…

Discuss the striking new Jaguar XJ on our forum