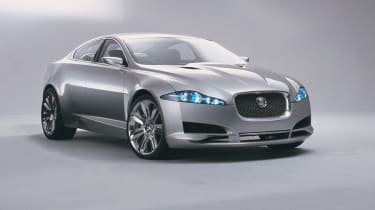 It's a couple of months ago, well before pictures of the new Jaguar concept car will be released, and I've been given an exclusive invite to preview the C-XF, as it's known, with design director Ian Callum and his team. But as I enter the carefully prepared studio in Banbury, my heart sinks. There, in front of me, are three cars that have been dragged out of the Jaguar museum for the occasion: a Mk10, a Mk2 and an original XJ, all with carefully placed drip-trays beneath their apparently porous engines…

What is Jaguar thinking? Surely it’s time to break away from this heritage nonsense. Why keep banging on about it when all customers really want is a great-looking, super-efficient Jaguar saloon that doesn’t hark back to the olden days but makes them feel good about themselves right now? Then, just as I'm coming to the boil over this heritage malarkey, we're whisked to the studio next door where the glorious new C-XF concept is waiting. Suddenly I’m back in the 21st century again. Looks like Jaguar has been listening after all…

Jaguar claims the C-XF signals the onset of a new era for the marque, and from where I’m standing it looks like it could be right this time around. Certainly it’s a whole lot harder making a four-door saloon look sexy than making a two-door coupe look good but, with the C-XF, Jaguar seems to have pulled it off.

The company would like us to believe that this concept is the look of the next-generation S-type saloon, due to go on sale early in 2008. If so, it would be hard to think of a car that has undergone a greater transformation. Talk about ugly ducklings turning into swans…

The C-XF not only points to the new S-type but is smothered in details that will also make their way onto other production Jaguars over the coming few years. For a start, the completely new inset grille on the C-XF is to be part of the new face of Jaguar from now on, including the redesigned ‘growler’ Jaguar badge set into it.

The side power vents, first seen on the XK8, are also to become another Jaguar signature. They will soon appear on a revamped XJ, while here on the C-XF they’ve been sculpted from ceramic material (as have the tailpipes), rather than aluminium as on the other models.

Callum's main aim with the C-XF was to give a feeling of movement that you could sense even when the car's stationary. It also had to look as if it was designed by craftsman, not by a computer, he says, adding that Jaguars should be sensual, with long, elegant curves combined with muscular haunches hinting at latent power.

Moving inside, Callum points out that Jaguar interiors are all about materials and the need for occupants to feel enclosed, as if they have to ‘nestle’ into the cabin. The C-XF certainly promotes that feeling, with its four individual leather chairs and tall central transmission tunnel. Neat touches include the pulsing starter button to signify a heart beating, the scorched poplar wood used throughout the cabin and the carbonfibre-pattern leather.

The C-XF is exactly what a modern Jaguar should look like, then. Callum says the earlier cars were there only to show that Jaguar design isn’t about recycling heritage but setting the correct values for future Jaguars.

I don’t care about that. What’s important is that this is one of the best looking Jaguars I’ve seen in years – and that’s all that really matters in today’s image-obsessed world.