This is the moment of truth for Jaguar’s XFR as it meets BMW’s own 500bhp supersaloon. John Barker takes notes 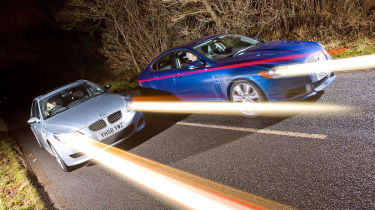 You’re driving an M5. The first thing you usually do is push the ‘M’ button on the steering wheel to summon up your preferred settings – and if you’re like me, that means the full 500bhp, electronic damping standing easy, stability control off duty. But not right now. BMW’s supersaloon may be the most involving and rewarding of its kind, forging a link between car and driver like no other, but you have to recognise there’s a time and a place. Fat tyres, big kerb weights and broad bodywork don’t encourage a press-on driving style on narrow, roller-coaster roads glistening damp in the dark, the temperature barely above freezing. Tonight is a night for using the cosseting, easy-going side of a supersaloon’s nature.

It should have been another time and place but twice already this rendezvous of M5 and XFR has been cancelled because of snow. This is our last chance, so while Mr Viv gets to drive the XFR in sunny Seville, Spain, I get to measure it against the M5 in arctic Atherstone, Warwickshire. And yet this is set to be an enlightening encounter.

The M5 has been our favourite big saloon for a few years now, just hanging on to its top spot against a range of talented, big-horsepower rivals including the Mercedes CLS63 AMG and Maserati Quattroporte. It has been a couple of years since I’ve driven an M5 and one aspect of it is instantly striking: the seven-speed SMG automated manual gearbox now feels very old-tech. It may have once been a marker in the sand for this type of ’box but a wave of impressive dual-clutch transmissions and enhanced and sharpened torque-converter automatics have since swept by it. In auto mode it’s ponderous, while using the paddles and a fast shift speed it’s uncomfortably thumpy. Expectations have risen beyond it.

I was acutely aware of this having stepped into the M5 from our long-term XF SV8 with its superb ZF torque-converter auto. I thought this proximity to the XFR’s predecessor gave me a useful standpoint from which to predict how the M5 and XFR encounter might unfold, and I have to confess that my money was on the M5 – I just couldn’t see how the XFR could make use of 500bhp. Ask for big dollops of supercharged torque from the 400bhp SV8 on cold, slick roads like these and the stability control light semaphores ‘n.o_w.a.y’ as the system gets busy backing off and reinstating power and dabbing individual brakes. Even in the dry it can struggle.

The M5 doesn’t have this problem. Its naturally aspirated 5-litre V10 delivers its big power high up the rev-range and it gains extra drive thanks to its adaptive, limited-slip ‘M diff’. And yet, sat what feels quite high in the M5’s plump and supportive driver’s seat, enjoying the direct link the SMG ’box provides between the throttle pedal and the rear wheels, you’ve still got to feel pretty darned confident to get the revs up and coax attitude from the M5. It feels just like it looks – big and hefty. Smooth riding, and with a hint of agility – a hint of dynamic alacrity about its demeanour too – but mostly big and hefty.

It certainly looks chunky alongside the XFR, which has been brought along by Jaguar’s dynamics guru, Mike Cross. My first thought is that the XFR has less attractive wheels than the five-spoke 20s on our SV8. But that, it transpires, will be the last unfavourable comparison with the out-going model.

‘We bought an M5 at the start of the XFR project,’ says Cross, ‘but towards the end it was the SV8 we were using as the benchmark.’ We’re heading for some less busy roads that Cross knows, and from the passenger seat the XFR feels much like the SV8. The differences are subtle, like the slightly firmer edge to the ride, the firmer bolsters of the seat and the fruitier V8 croon from the tailpipes.

I’m quite unprepared for the first full-throttle moment, partly because my mind has told me our SV8 wouldn’t find the traction to use all of its 400bhp on the damp, narrow straight picked out in the headlamps. Cross nails the XFR’s throttle, the gearbox drops two cogs in an instant and we’re slammed forward, the shove uninterrupted and relentless.

It’s dizzying, amazing, a kind of magic. The trick, says Cross, is getting all the systems to work together. In some ways, it’s a less prescriptive version of Ferrari’s manettino control, various scenarios having been considered and mapped out so that the car will behave in the best way, adjusting the percentage of diff lock, the relative and absolute stiffness of the front and rear dampers and the contribution of traction and stability control to produce optimum drive. It’s quite staggering considering the XFR has the same size tyres as the SV8. If Cross had said the engineers had fitted four-wheel drive I’d have believed him.

My turn. What you can’t appreciate from the passenger seat is how swiftly the gearbox responds to the flooring of the throttle, but it’s as astonishing as the grip the rear tyres find. There’s much more to the XFR than that, though. It’s much like the SV8 until you ask for more: make a firm steering input and the steering delivers, lean on the brakes and they bite with more conviction, tackle dips and crests at speed and the damping keeps the body in what feels like a tight, natural check. It shouldn’t suit these tricky roads and conditions but it does.

It’s harder work at the same pace in the M5, firstly because to keep the XFR in range you’ve got to be in the right gear with the revs poised on the threshold of maximum torque. If you’re not, the Jag is gone in an instant. Keeping the revs of the warbling V10 up high and feeling the gearshifts thump home adds tension but that’s not all. Surprisingly, the M5’s steering feels less clean and direct and you’re more aware of the car’s weight, no matter what setting the electronic dampers are on.

I have driven many miles in M5s including a few laps of the Nürburgring and I know that when you’re absolutely on it there’s no other saloon that rewards and involves to the same degree. I’d say that still holds true. But for the other 99 per cent of the time I reckon the XFR has the measure of it. This remarkable Jaguar does long-distance comfort and effortless everyday usabilty, yet there, just below the surface, on demand, is a direct, no-nonsense, steely-edged supersaloon.