The Jaguar F-type Project 7 is a one-off single-seater F-type, which made its debut at Goodwood. Here's a new video explaining how the project materialised 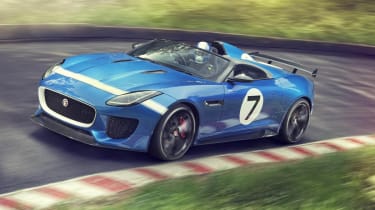 Jaguar has released a new video of its F-type Project 7 concept, with the car’s designer explaining the process of how the car came into being. Ian Callum saw the project through with a small team, as he explains in the video. The car was first displayed at the 2013 Goodwood Festival of Speed.

F-type Project 7, as it's been named, is a bold speedster model that apes the Jaguar D-type racing cars of the 1950s. Based on the production-spec Roadster, Project 7 uses the 542bhp supercharged 5-litre V8 engine seen in the XKR-S coupe and convertible.

The F-type V8 S uses the same engine with 488bhp; endowing this concept with more power could be a hint at what to expect from the F-type R or RS models that lie in the future.

Project 7's body is aluminium and it's a single seater, while a roof and side windows are conspicuous by their absence. There 's also a gamut of carbonfibre aero parts including a splitter and rear diffuser.

All told, a significant drop from a regular V8 F-type's 1665kg kerb weight ought to be expected, though Project 7's interior looks similarly lavish. And if you're wondering about the name, it's a nod to the seven Le Mans wins under Jaguar's belt...

With Jaguar’s freer-flowing exhaust providing a suitably spectacular soundtrack and a 10mm reduced ride-height the extent of suspension modifications, the rest of the car is largely unmodified. 0-60mph takes 4.1sec while the top speed is 186mph.